Bowman’s capsule rupture may be an important marker of pathologic changes and high risk for end-stage kidney disease (ESKD) in patients with lupus nephritis (LN), according to investigators.

In a multivariable Cox regression analysis, a high serum creatinine and activity index and a greater proportion of glomeruli with Bowman’s capsule rupture significantly predicted a 39.6-, 1.5, and 1.1-fold increased risk for progression to ESKD, respectively, the investigators reported. Among patients with vs without crescents, the presence of Bowman’s capsule rupture (which included at least 1 crescent, by definition) was significantly associated with lower ESKD-free survival. 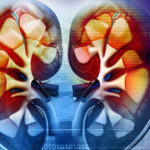