Elevated uric acid levels are associated with increased risk of ischemic heart disease and blood pressure, but appear unlikely to cause these problems, a study found.

Nicholas J. Timpson, PhD, of the University of Bristol in Bristol, U.K. and colleagues used measured uric acid levels and related covariables in 58,072 participants in the Copenhagen General Population Study and 10,602 in the Copenhagen City Heart Study. In these study populations, the researchers identified 4,890 and 2,282 cases of ischemic heart disease, respectively.

To determine whether uric acid was causally associated with ischemic heart disease, Dr. Timpson’s team conducted Mendelian randomization analyses using a variation at a specific gene—the rs7442295 single nucleotide polymorphism in the SLC2A9 gene—to act as a proxy measure for this risk factor. This gene variation is known to be strongly associated with increased plasma levels of uric acid, hyperuricemia, urate excretion, and gout.

Observationally, each standard deviation increase in plasma uric acid level was associated with a 55% and 34% increased odds of ischemic heart disease in the Copenhagen General Population Study, and Copenhagen City Heart Study, respectively. In a pooled analysis, the risk was increased by 49%, which was attenuated to 21% after adjusting for age, gender, smoking, educational attainment, and income. The researchers observed a similar pattern with hyperuricemia.

In addition, each standard deviation increase in uric acid level was associated with a 2.42 mm Hg elevation in diastolic blood pressure. This was attenuated to 1.56 mm in adjusted analyses. Subjects with hyperuricemia had an average increase of 4.61 mm Hg in diastolic pressure, which was attenuated to 2.66 mm Hg in adjusted analyses. The investigators observed a similar pattern between uric and hyperuricemia and systolic blood pressure.

Mendelian randomization revealed no association between variation at SLC2A9 (rs7442295) and ischemic heart disease or either diastolic or systolic blood pressure in either cohort. Furthermore, Mendelian randomization showed that BMI has a causal effect on uric acid level, but not the other way around. Each four-unit increment in BMI caused a 0.03 mmol/L increase in uric acid level and a 7.5% increase in the risk of hyperuricemia.

According to the investigators, their findings strongly suggest that BMI is a confounder in the observed associations between uric acid and ischemic heart disease and blood pressure. The findings also suggest a role for elevated BMI or obesity in the development of uric acid-related conditions.

Dr. Timpson and his collaborators concluded that their findings “suggest that interventions to reduce body mass index could help improve management of gout and related conditions such as urolithiasis.” 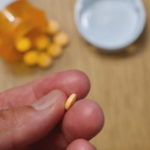 Urate-Lowering Therapy May Be Renoprotective in Asymptomatic Hyperuricemia