Elevated serum ferritin levels may increase the risk of gout, according to a new study.

Average ferritin levels were increased in the NZ Polynesian and US gout cases compared with controls, but not between NZ European gout cases and controls. Ferritin was not associated with an increased risk of gout in the NZ European data set, a team led by Tony R. Merriman, PhD, of the University of Otago in Dunedin, New Zealand, reported.

“We provide the first evidence for [a] positive association of serum ferritin levels with the risk of gout and with the frequency of gout flares,” the authors concluded.

Previous research suggests a plausible link between iron and gout. Ferritin stores excess iron, and urate acts as an iron chelator, the authors explained. Thus, iron can increase the activity of xanthine oxidase, the sole enzymatic source of urate in human beings, they noted. The investigators cited a study published in Rheumatology (2003;42:1550-1555) showing that use of phlebotomy to maintain near iron-deficient levels in patients with hyperuricemia was associated with a marked decrease in the incidence and severity of gouty attacks.

“Clinically, our data suggest that consideration of avoidance of iron-rich foods could improve flare avoidance advice given to people with gout.”

The authors noted that iron-rich foods, including seafood/fish and red meat, are important gout flare triggers. In a study of 2051 New Zealand patients with gout, 62.5% reported seafood or fish and 35.2% reported red meat as gout flare triggers, according to a paper published in BMC Musculoskeletal Disorders (2015;16:196)

In a discussion of study limitations, Dr Merriman and his colleagues noted that gout cases between NZ and US cohorts were ascertained differently: by clinical diagnosis only and by a combination of clinical diagnosis and crystal-proven gout, respectively. In addition, NZ gout cases were not screened for current exposure to anti-inflammatory drugs, which are a potential confounder. 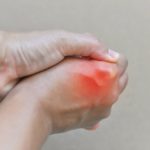