As body mass index increases, so does a person’s risk of gout, according to a new study.

In a systematic review and meta-analysis of 10 prospective studies involving a total of 27,944 cases among 215,739 participants, researchers found that each 5-unit increment in BMI was associated with a 55% increased relative risk of gout, with a non-significant difference in relative risk between men and women (62% vs. 49%, respectively).

In addition, compared with individuals who had a BMI of 20 kg/m2, those with a BMI of 25, 30, 35, and 40 kg/m2 had a 1.8, 2.7, 3.6, and 4.6 times increased relative risk of gout, Dagfinn Aune, a PhD student in nutrition at the Norwegian University of Science and Technology in Trondheim, Norway, and colleagues reported online in the European Journal of Nutrition.

Aune noted that the assessment of BMI in early adulthood was done retrospectively: Subjects recalled BMI at baseline, usually when they were 40–50 years old.

The association between BMI and gout appeared to be independent of other established or suspected risk factors for gout, including cholesterol levels, alcohol intake, diuretic use, renal failure or insufficiency, and intake of meat, seafood, and fruits and vegetables, according to the investigators.

“Greater adiposity may increase the risk of gout by increasing serum uric acid levels,” the researchers explained. “Obesity, and in particular abdominal obesity, has been associated with hyperuricemia possibly due to increasing production and reduced renal excretion of urate.” 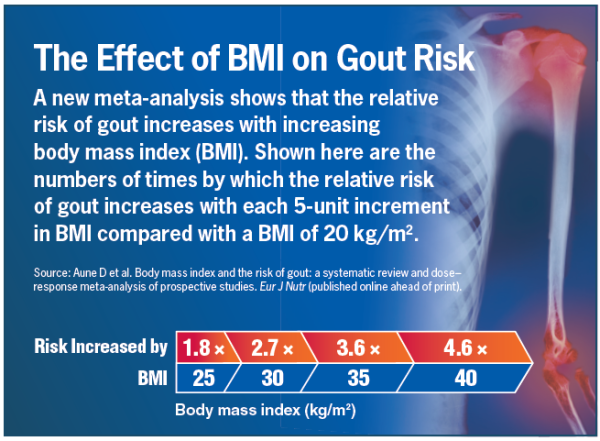 The researchers noted that one of the strengths of their study was the prospective design of the included studies, which reduces the possibility that recall bias and selection bias can explain the findings. Another strength was an adequate sample size that provided the statistically power to detect important associations and allowed for detailed dose–response and subgroup analyses, they noted.

The researchers pointed out that the main limitation of their study was the low number of studies that were included in the analysis of BMI in young adulthood, WHR, and weight gain. Furthermore, they noted that they could not exclude the possibility that residual confounding by unmeasured or unidentified factors could partly explain the observed associations.

However, the confounding factor would have to be strongly associated with both adiposity and gout, they stated, and they consider it unlikely that this could fully explain the associations they observed. 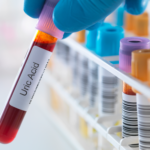