The genetic etiology of hyperuricemia, gout, and their comorbidities was demonstrated; both hyperuricemia and gout were found to be linked to chronic kidney disease (CKD) and components of metabolic syndrome, such as obesity, type 2 diabetes mellitus (T2D), and hypertension, according to results of an analysis published in European Journal of Human Genetics.

Recognizing that CKD, T2D, obesity, and hypertension are all comorbidities with a high prevalence among individuals with hyperuricemia (defined as a serum urate level of >6.8 mg/dL) and gout, the researchers sought to explore the hypothesis that the co-association of traits that represented hyperuricemia and its comorbidities had a genetic basis.

Main genetic findings that were replicated in both the FHS and the HyperGEN datasets included the fact that SCr level was genetically linked to urate level only, as well as the finding that BMI was genetically correlated to urate level, SBP, and glucose level. Since SCr levels are genetically linked to urate levels, but not to metabolic traits, it implies that 1 genetic module of shared loci, which are associated with hyperuricemia and CKD, exists. Further, another module of shared loci may help to explain the association between hyperuricemia and metabolic syndrome.

Study limitations included the inability to infer directionality of causal relationships and that the genetic correlations estimated from genomic data have been questioned.

Researchers concluded that the findings from this study motivate “future quantification of genetic correlations at individual loci, which will increase our knowledge of the genetic etiology of hyperuricemia, gout, and its comorbidities.” 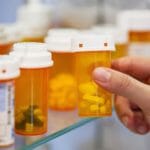