Patients with uncontrolled gout receiving pegloticase had similar characteristics as those from previous phase 3 randomized clinical trials; the patients were found to be significantly affected by systemic comorbid diseases and had stable or improved kidney function, according to study data presented the European Alliance of Associations for Rheumatology (EULAR) 2021 Virtual Congress, held from June 2 to 5, 2021.

Researchers used the TriNetX Diamond database, which includes de-identified data from 4.3 million US patients with gout. Patients who received 1 or more pegloticase infusions were included in the analysis. The number of infusions was determined for a subgroup of patients who were included in the database 3 or more months before and 2 or more years after the first pegloticase infusion. Kidney function and immunomodulation prescriptions were also examined for this subgroup of patients.

A total of 1494 patients (63.1±14.0 years; 82% men; 76% White) with uncontrolled gout were identified. Prior to pegloticase treatment, mean serum uric acid level was 8.7±2.4 mg/dL, indicating uncontrolled gout (n=50). Chronic kidney disease (CKD; 48%), essential hypertension (71%), type 2 diabetes (39%), and cardiovascular disease (38%) were the most commonly reported comorbidities and were found to be similar as those from pegloticase pivotal phase 3 trial populations.

A total of 791 patients had complete treatment course capture and received 8.7±13.8 infusions. Of these patients, 189 (24%) received only 1 pegloticase infusion and 173 (22%) received 12 or more infusions. A total of 19 (2%) patients received immunomodulation co-therapy with pegloticase but the current analysis predated its use.

One of the study limitations was the inclusion of only a small percentage of the total cohort receiving co-treatment with an immunomodulator.

According to the researchers, “Future studies using more current datasets are needed to evaluate real world outcomes in patients treated with pegloticase/immunomodulator co-therapy and to evaluate the impact of systemic co-morbid diseases.” 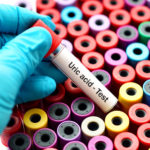