Alpha blocker use to control hypertension may be associated with a higher risk for kidney disease progression and a lower risk for cardiac events and mortality compared with use of alternative antihypertensive medications in patients with chronic kidney disease (CKD), according to a recent population-based retrospective study published in the American Journal of Kidney Diseases.

The findings could allow clinicians to have more nuanced discussions with patients who have CKD regarding the long-term risks associated with alpha blocker use, lead investigator Gregory L. Hundemer, MD, of the Ottawa Hospital Research Institute and The Ottawa Hospital, Riverside Campus, Ontario, Canada, told Renal & Urology News. “Nephrologists need to balance the pros and cons of prescribing alpha blockers to their patients on a case-by-case basis,” Dr Hundemer said.

Out of 381,120 patients aged 66 years or older living in Ontario who received treatment for hypertension from 2007 to 2015, the investigators identified 16,088 patients who were newly prescribed alpha blockers (doxazosin, terazosin, and prazosin) and matched them with 16,088 patients who were newly prescribed antihypertensive medications other than alpha blockers (ACE inhibitors, angiotensin receptor blockers, calcium channel blockers, beta blockers, and thiazide diuretics). Patients had a mean age of 76 years and mean eGFR of 62 mL/min/1.73m2.

Alpha blocker use was significantly associated with a 14% higher risk of a 30% or greater eGFR decline and 28% increased likelihood of dialysis initiation or kidney transplantation compared with use of medications other than alpha blockers, the investigators reported. The findings held regardless of eGFR category.

In addition, use of alpha blockers, compared with the use of other antihypertensive agents, was significantly associated with an 8% decreased risk of cardiac events, a finding consistent across eGFR categories. Alpha blocker use was significantly associated with a 15% and 29% decreased risk of death among patients with an eGFR of 30 to 59 and less than 30 mL/min/1.73 m2, respectively.

The authors note that the study is limited by its observational design and a lack of detailed blood pressure (BP) measurement data.

“I think the current trial will sensitize physicians to the possibility that alpha blockers may have positive and negative effects beyond strict BP control,” said Samuel N. Saltzberg, MD, associate professor of medicine at Rush Medical College in Chicago, Illinois. “The study also raises the question as to whether the widely used — at least in the US — alpha-beta blocker carvedilol has the same effects.”

Dr. Saltzberg said the large study population and excellent data from a comprehensive database are strengths of the study, but noted, “Unfortunately, the study suffers from the typical limitations of a retrospective study. There may be important differences in the characteristics of the patients that were treated with an alpha blocker compared to those who were not. The physicians who prescribe alpha blockers may have different approaches to treating BP than those who do not.”

He said he has not observed a negative effect of alpha blockers among his patients with CKD, but it appears the effect described in the current study would not likely be seen or obvious in a smaller population. 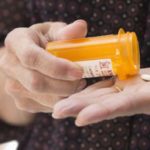