The cohort had an estimated glomerular filtration rate (eGFR) of less than 60 mL/min/1.73 m2 at baseline. At 3 years, eGFR had declined faster in the hyperkalemia than normokalemia group: −5.75 vs −1.79 mL/min/1.73 m2, respectively. Results showed the hyperkalemia group had a 7.5-fold higher risk for initiation of renal replacement therapy, Dr Yajima and his colleagues reported. All results were comparable in subgroup analyses of patients with and without heart failure.

At baseline, the hyperkalemia and normokalemia groups were matched by age, CKD stage, and eGFR. They had similar prevalence of acute kidney injury, heart failure, diabetes, hypertension, dyslipidemia, and other major comorbidities. Their use of drugs associated with hyperkalemia, diabetes medications, and CV drugs were comparable, except for inotrope and mineralocorticoid receptor antagonist.

Although the study could not prove that hyperkalemia directly causes these adverse outcomes, the investigators noted that hyperkalemia commonly interferes with a healthy diet, contributes to metabolic acidosis, and prompts discontinuation of renin-angiotensin-aldosterone system (RAAS) inhibitors.

“Our findings underscore the significance of hyperkalemic condition as a precursor of future adverse events,” Dr Yajima’s team stated. “Continuous [serum potassium] level management in high-risk patients with CKD with hyperkalemia would be important for better clinical outcomes.” 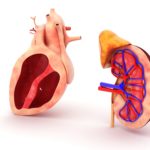