Medical researchers have received approval to begin safety and performance testing of the Wearable Artificial Kidney. The federal Food and Drug Administration and the University of Washington Institutional Review Board accepted the protocol for the clinical trial. Expected to start this autumn in Seattle, it will be the first human study in the United States to be conducted on the device.

The Wearable Artificial Kidney, also known as the WAK, is a miniaturized dialysis machine that can be worn on the body. The carrier resembles a tool belt; the device connects to a patient via a catheter. Like conventional dialysis machines, it is designed to filter the blood of people whose kidneys have stopped working. 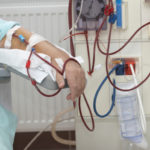