Twice-weekly hemodialysis (HD) during the first year of dialysis treatment is associated with better preservation of residual kidney function (RKF) compared with thrice-weekly HD, according to a new study.

RKF has consistently been a predictor of greater survival in patients on maintenance hemodialysis (MHD), but the relationship between HD treatment frequency and RKF preservation has not been well characterized. Jing Chen, MD, PhD, of Huashan Hospital, Fudan University, Shanghai, China, and colleagues, in collaboration with Kamyar Kalantar-Zadeh, MD, PhD, of the University of California Irvine, conducted a 2-part study.

In the first part, they examined an historical cohort of 85 MHD patients with a urine output of at least 500 mL per day. In this main cohort study, 30 patients were started with twice-weekly HD for 6 months or longer and 55 were started and maintained on thrice-weekly HD treatment. In the second part, the researchers examined a subcohort of the 48 incident MHD patients (32 from the main cohort and 16 new patients) to assess the independent risk factors responsible for RKF decline during the first yer on HD therapy. 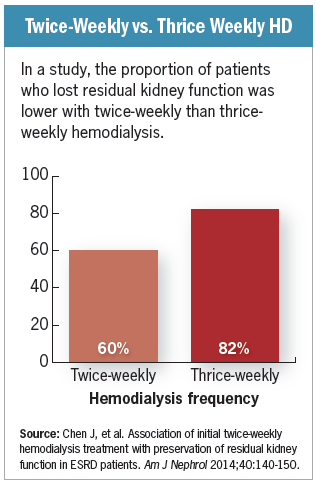 The patients had a baseline urine output of at least 500 mL per day and an HD vintage less than 12 months.

The main cohort study showed that the clinical outcomes were almost the same between the 2 groups, but the proportion of patients with RKF loss—defined as a urine volume less than 200 mL per day—was significantly lower in the twice-weekly group compared with the thrice-weekly group (60% vs. 82%), Dr. Chen’s group reported in the American Journal of Nephrology (2014;40:140-150).

In the 48 incident MHD patients, the investigators observed no significant differences between the 2 groups except for variations in HD frequency. Patients in both groups had comparable HD adequacy.

The researchers noted that K-DOQI [Kidney Disease Outcomes Quality Initiative] guidelines recommend thrice-weekly HD as the standard of care for achieving an adequate HD dose in patients with end-stage renal disease, but twice-weekly HD is widely used as the initial treatment in China, India, and many other developing countries for various clinical and economic reasons.

Dr. Chen’s team acknowledged some study limitations, including a relatively small number of subjects and short follow-up. In addition, the study was retrospective, so HD frequency was not randomly assigned, potentially biasing results. 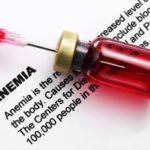