In a study conducted at the VA Medical Center in Washington, D.C., researchers retrospectively studied 6,163 men (mean age 68 years) for 14 years. The vast majority of the men were hypertensive, 80% were African Americans, and 30% were smokers.  The investigators assessed subjects’ left ventricular mass index (LVMI) at baseline and measured kidney function and BP levels at baseline and at the end of the 14-year follow-up period.

In addition, patients with at least moderate LVH (LVMI greater than 125 g/m2) showed a marked decline in kidney function compared with those without LVH (LVMI below 110 g/m2).

“In men with high cardiovascular risk, the severity of LVH could be a useful clinical tool in determining the decline of kidney function, including the increased probability for hemodialysis,” said investigator Costas Tsioufis, MD, now with the University of Athens’ Hippokration Hospital in Greece.

“These results underline that at least moderate cardiac hypertrophy substantially accelerates the development of adverse renal outcomes, further suggesting that minor degrees of hypertrophy could constitute the appropriate time period to act for protecting kidneys from progressive damage.” 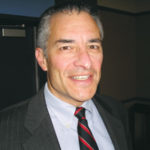 BP Guidelines May be Inappropriate for HD Patients