New findings suggest that iron may have a role in the pathogenesis of calciphylaxis.

Calciphylaxis, which also is known as calcific uremic arteriolopathy (CUA), is characterized by microvascular calcification and thrombosis with resultant tissue necrosis.

Clifford Chan-Yan, MD, and colleagues at the University of British Columbia in Vancouver, Canada, analyzed tissue blocks from 12 patients diagnosed with CUA. Subjects had an average age of 61 years (range 36-83 years). At the time of diagnosis, eight patients were on peritoneal dialysis, two were on hemodialysis, and two were pre-dialysis. In addition, eight patients had diabetes, eight had coronary artery disease, and 10 had dyslipidemia. Prior to the CUA diagnosis, the cohort had an average time on dialysis of 2.1 years.

The investigators detected iron deposition in areas of microvascular calcification in all diagnostic specimens and but not in unaffected microvasculature within the same biopsy specimens, according to a report in Nephrology Dialysis Transplantation (2011;26:191-195).

“The findings of iron deposition in affected microvasculature lend support to the potential role of iron in the complex pathophysiologic cascade of CUA,” the authors wrote.

The findings may provide additional rationale for the use of iron chelators for treating CUA, according to the researchers.

Dr. Chan-Yan’s group noted that they cannot be sure whether the occurrence of iron CUA lesions is a primary or secondary event, but research involving an animal model of calciphylaxis shows that the deposition of iron in tissue precedes the appearance of calciphylaxis. 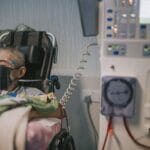