The more time that elapses from a patient’s last hemodialysis session to surgery, the greater the risk for death, a new study finds.

Vikram Fielding-Singh, MD, JD, of Stanford University School of Medicine in California, and colleagues performed a retrospective cohort study of 1,147,846 planned procedures (median age 65 years; 43.1% female) among 346,828 Medicare beneficiaries with end-stage kidney disease (ESKD) treated with thrice-weekly maintenance hemodialysis. Two-thirds of procedures (65.4%) had a 1-day interval between hemodialysis and surgery, 24.9% had a 2-day interval, and 9.7% had a 3-day interval.

Compared with having a procedure 1 day after hemodialysis, a 2- or 3-day interval was significantly associated with a 14% and 25% increased risk for all-cause mortality within 90 days, respectively, Dr Fielding-Singh’s team reported in JAMA. The absolute risk differences were small: 0.6% and 1.0%, respectively. Longer hemodialysis intervals before surgery were also significantly associated with higher risks of cardiovascular mortality and all-cause hospital readmissions within 90 days.

In addition, undergoing hemodialysis on the same day as surgery was significantly associated with a 12% decreased risk of 90-day mortality, the investigators reported.

The most common procedures included intraocular drug injections and fluid removal (19.6%), hemodialysis access procedures (19.0%), vascular procedures not involving the head or neck (12.7%), lens and cataract procedures (10.7%), and debridement of wounds, infection, or burns (8.6%).

Minor procedures are common among patients with ESKD, Dr Fielding-Singh’s team pointed out, “so even small changes in absolute risk could be meaningful.” Hemodialysis timing before surgery may be a modifiable risk factor, they stated.

In an accompanying editorial, Anthony J. Bleyer, MD, MS, of Wake Forest University in Winston-Salem, North Carolina, explained that surgery introduces cardiovascular stresses that may affect cardiac function and lead to increased mortality. Conversely, a significant proportion of excess mortality risk could have been due to changes in the patient’s regular hemodialysis schedule, he noted.

“Performing surgeries on the day after a hemodialysis session causes less disruption in patient care and is likely to be beneficial to patients overall,” according to Dr Bleyer.

The study investigators acknowledged that factors other than hemodialysis timing may have influenced post-surgery mortality. For example, patients who underwent surgery 3 days after their hemodialysis session may have had disabilities, limited transportation, or other extenuating circumstances necessitating delays in procedures. 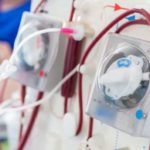 FDA: Prolia Use in Dialysis Patients May Cause Severe Hypocalcemia