Dialysis patients and kidney transplant recipients have nearly triple the risk of dying from cancer than the general population, according to new study findings published in the Journal of the American Society of Nephrology.

Eric H. Au, MBBS, from the University of Sydney, and colleagues followed 52,936 patients who started dialysis and 16,820 who received a kidney transplant during 1980 to 2014 using the Australia and New Zealand Dialysis and Transplant Registry. Of these, 2739 dialysis and 923 transplant patients died from cancer. The standardized mortality ratio (SMR) was 2.6 for dialysis patients and a 2.7 SMR for transplant recipients for overall cancer.

“The high cancer mortality rate seen in dialysis patients with a pre-existing cancer which lead to ESKD, such as multiple myeloma and kidney cancer, and the relatively short time to cancer death (of less than two years) after commencement of dialysis suggest that despite commencement of dialysis, these patients’ overall prognosis may still be predominantly affected by their underlying malignancy. This is an important consideration for clinicians when considering dialysis and other treatment options for ESKD in these patients…” according to Dr Au and his peers.

“The poor outcomes experienced by transplant recipients for certain cancers may be due to a range of factors, such as the influence of immunosuppression on the aggressiveness of cancer development and the limited available treatment options for these cancers,” the authors further suggested. 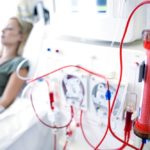 Study: Dialysis Is a Bigger Mortality Risk Than Some Cancers