(HealthDay News) — For patients undergoing dialysis in the US territories versus the 50 states, mortality rates differ by race/ethnicity, according to a study published online in the Clinical Journal of the American Society of Nephrology.

Guofen Yan, PhD, from the University of Virginia School of Medicine in Charlottesville, and colleagues conducted a retrospective cohort study using data from the U.S. Renal Data System for 1,547,438 adults with no prior transplantation and first dialysis treatment between April 1, 1995, and Sept. 28, 2012. For each racial/ethnic group, the hazard ratios of death for the territories (American Samoa, Guam, Puerto Rico, and Virgin Islands) versus the 50 states were calculated. A total of 22,828 patients were treated in the territories and 1,524,610 patients were treated in the 50 states.

“Further studies are needed to better understand the influence of issues such as genetic factors, insurance coverage, health infrastructure, health beliefs and behaviors, social networks, and other subtleties in the United States territories that may add critical insights to our observations,” the authors write. 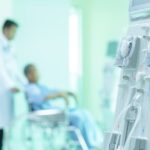