Higher levels of physical activity are associated with a significantly decreased risk of end-stage renal disease (ESRD), according to researchers.

Investigators collected information on physical activity using a structured questionnaire modeled after the European Prospective Investigation in Cancer (EPIC) study physical activity questionnaire. They defined physically active subjects as those who engaged in any moderate activities (such as brisk walking, bowling, bicycling on level ground) for 2 hours or more per week and strenuous aerobic activities (such as jogging, tennis, and bicycling on hills) 30 minutes or more per week.

During a median follow-up of 15.3 years, ESRD developed in 642 individuals and 9,808 participants died. Compared with no physical activity, moderate or strenuous physical activity was associated with a 24% decreased risk of ESRD after adjusting for age, sex, body mass index, and other potential confounders, Dr. Jafar’s group reported online ahead of print in Nephrology.

The precise mechanism responsible for the independent relationship between physical activity and ESRD is not entirely clear, the investigators noted. Studies show that physical activity can decrease blood pressure and improve glycemia control.

It also can improve cardiovascular health by enhancing endothelial function directly through response to insulin, angiogenesis, and vascular regeneration via the up-regulation of endothelial nitric oxide production and other antioxidant enzymes. “It is entirely conceivable that the same would extend to the kidney vasculature leading to protection against glomerular filtration barrier defects, albuminuria, and declining kidney function,” the authors commented.

Dr. Jafar and her colleagues said a major strength of their study is the large sample size of a population-based cohort with near-complete follow-up, but the study had some limitations. One limitation was that physical activity was self-reported and did not include an objective assessment.

Another limitation was the absence of information on baseline kidney function, including serum creatinine or albuminuria. “This raises concern whether the observed association was mainly because individuals with pre-existing CKD had already reduced their physical activity at baseline,” the researchers stated. 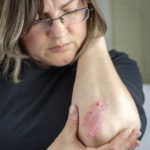 Psoriasis Not Tied to Myocardial Infarction in Patients With ESRD