In a post hoc analysis of SONAR (Study Of Diabetic Nephropathy With Atrasentan; NCT01858532), investigators matched 14 patients receiving a combination of the endothelial receptor antagonist (ERA) atrasentan and a SGLT2i to 42 patients receiving atrasentan alone (0.75 mg/d). After 6 weeks, urinary albumin-to-creatinine ratio (UACR) had decreased a significant 27.6% more in the SGLT2i/atrasentan  group than in the atrasentan only group: -54.7% vs -37.6%, respectively, Hiddo J.L. Heerspink, PhD, PharmD, of University Medical Center Groningen in Groningen, The Netherlands, and colleagues reported in Kidney International.

Body weight, a proxy for fluid retention, increased by 0.6 kg in the atrasentan only group, whereas it decreased by 0.7 kg in the combined SGLT2i/atrasentan group, for a significant between-group difference of 1.2 kg. Brain natriuretic peptide (BNP) also decreased.

ERAs have not been used in this population because previous studies have shown they cause sodium and fluid retention, which may lead to heart failure. According to Dr Heerspink’s team, “combining SGLT2i with the ERA atrasentan may exert beneficial synergistic effects that augment albuminuria reduction while offsetting fluid retention.”

In SONAR, all patients were treated with the maximum tolerated daily dose of a renin-angiotensin-system inhibitor. Patients with a body weight increase of more than 3 kg or a BNP level of at least 300 pg/mL were excluded because they were considered at risk for edema and heart failure. Patients had an estimated glomerular filtration rate of 25 to 75 mL/min/1.73 m2, a UACR of 300 to 5000 mg/g, and a BNP not exceeding 200 pg/ml.

According to the study authors, “these promising findings support future clinical studies to characterize the long-term efficacy and safety of combined SGLT2i/ERA treatment.” 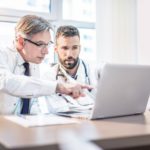