For adults with impaired glucose tolerance, a six-year lifestyle intervention program reduces cardiovascular and all-cause mortality, and diabetes, according to a study published in The Lancet Diabetes & Endocrinology. 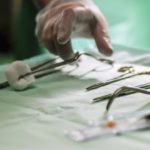