Moderate and heavy alcohol consumption may be associated with an increased risk of declining visual acuity, but not diabetic retinopathy, in patients with type 2 diabetes, data suggest.

Researchers led by Joline W. J. Beulens, PhD, of the Julius Centre for Health Sciences and Primary Care, University Medical Centre Utrecht, The Netherlands, analyzed data from 1,239 patients aged 55-81 years with type 2 diabetes enrolled in the Retinal Measurement (AdRem) study, a sub-study of the Action in Diabetes and Vascular Disease: Preterax and Diamicron MR Controlled Evaluation (ADVANCE) trial. The team measured outcomes using retinal photographs from baseline and final visits and with data on deterioration of visual acuity. Participants who consumed 1-14 and more than 14 drinks per week were defined as moderate and heavy alcohol drinkers, respectively.

After a mean follow-up of 5.5 years, researchers found that alcohol consumption was associated with an increased risk of deterioration of visual acuity. Investigators identified 640 subjects with the presence of any retinal vascular lesions and 693 who had a deterioration of visual acuity. Compared with individuals who did not consume alcohol, moderate and heavy drinkers had 1.8 and 2.0 times increased risk of a decline in visual acuity, respectively, after adjusting for potential confounders, the authors reported in Diabetic Medicine (2010;27:1130-1137). Each additional alcoholic drink consumed per week was associated with a 2% increase in risk of decline in visual acuity. Moderate alcohol intake was not associated with the presence or progression of diabetic retinopathy. Only 182 participants experienced retinopathy as defined by a two-step progression in the Early Treatment of Diabetic Retinopathy Study score based on the worst eye or the presence of any retinal vascular lesions at the final visit.

Further analyses of specific alcoholic beverages also revealed the association with deterioration of visual acuity was greater for beer or spirits than with wine. Among moderate drinkers of wine, beer, and spirits, the risk of visual acuity decline increased by 63%, 62%, and 44% compared with nondrinkers. Among heavy drinkers, the risk decreased by 6% with wine consumption but increased by 2.47 times with beer consumption and nearly twofold with spirits consumption.

“The natural antioxidants in wine may partially offset the adverse effects of alcohol,” the authors noted.

Although the study’s authors concluded that it is unclear why consumption of alcohol was associated with a decline in visual acuity in type 2 diabetes, they suggest that it is possible that individuals who consume alcohol have different lifestyle characteristics that increase the risk of visual loss. In addition, they observed that alcohol is known for its neurotoxic properties, which could induce oxidative damage to the retina and the optic nerve, leading to visual loss. 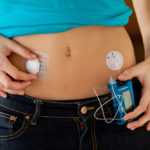