A recent study shows that sodium bicarbonate is no better than saline in preventing contrast-induced nephropathy (CIN).

The study was a double-blind, controlled trial involving 265 patients undergoing coronary angiography who were randomized to receive sodium bicarbonate plus saline or saline alone as CIN prophylaxis. CIN developed in 7.4% of patients in the sodium bicarbonate plus saline group and 5.9% of subjects in the saline only group, a nonsignificant difference between the groups, investigators reported in the American Journal of Kidney Diseases (2009; published online ahead of print)..

The finding contrasts with a recent meta-analysis of 17 randomized trials in which researchers found that sodium bicarbonate prophylaxis reduced the pooled relative risk of CIN by 46% compared with saline and by 43% compared with N-acetylcysteine, according to a report in International Urology and Nephrology (2009;41:617-627). 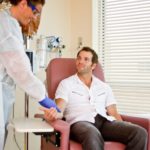 Recommendations for Use of IV Iodinated Contrast Media Updated