Chronic kidney disease (CKD) patients who smoke currently or formerly significantly increase their risks for cardiovascular disease, cancer, and early death, according to a new analysis of SHARP (Study of Heart and Renal Protection). Importantly, researchers did not find faster kidney disease progression.

In the study of 9270 CKD patients, current smokers had a 48% higher risk of all-cause mortality, compared with those who had never lit up, Jonathan Emberson, PhD, of the University of Oxford in the United Kingdom, and colleagues reported in the American Journal of Kidney Diseases (2016;68:338-340). Death from cancer and respiratory causes more than doubled. Smokers also had a 36% higher rate of vascular events from atherosclerotic and non-atherosclerotic causes.

Cancer risk was 37% higher among current smokers over a median 5 years of follow up. In particular, the risks of lung and upper aerodigestive tract cancers (i.e., malignancy of the lips, mouth, tongue, nose, throat, vocal cords, esophagus, or trachea) spiked by 9.31 and 4.87 times, respectively.

“These results are important because individuals with CKD are already at substantially increased risk for a wide variety of diseases, including cardiovascular disease, cancer, progression of kidney disease, and death,” Dr Emberson and colleagues stated. From 10% and 15% of CKD patients currently smoke, according to estimates.

The team separately assessed 6245 patients not receiving dialysis at baseline for kidney disease progression. ESRD incidence did not differ significantly for current, former, and never smokers, nor did eGFR decline. This finding differs from past studies and may reflect differences in methodology and confounding variables, according to an accompanying editorial. Cause of CKD did not appear to influence results.

Strengths of the SHARP study included its prospective design, large population, and validation of events. Some details on smoking were lacking, however, including starting age, types of cigarettes used, smoking status during follow-up, and years since quitting. At baseline, 13% of CKD patients smoked a median of 10 cigarettes per day, 35% were former smokers, and 51% never smoked.

“For patients with CKD who smoke, the potential benefit from cessation would be substantial and certainly much larger than any drug treatment that is used for cardiovascular or nephroprotection,” Dr Emberson and colleagues remarked. “These benefits have not been properly appreciated by nephrologists and primary care physicians, and there is a need for smoking cessation programs to be established as pivotal components of the care of patients with CKD.” 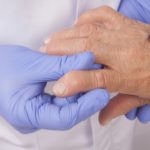