Anemia is a common complication of chronic kidney disease (CKD) that develops early in the course of disease and worsens as CKD progresses.1 Anemia is twice as prevalent among patients with CKD compared with the general population (15.4% vs 7.6%), with the prevalence of anemia among patients with CKD rising from 8.4% in stage 1 to 53.4% in stage 5.2 Although diminished erythropoietin production by the kidneys is a common cause of anemia in patients with CKD, iron deficiency also can be a contributing factor.1,3 Extensive research has resulted in a wealth of information about iron status and its association with anemia in dialysis patients, but this association is less well studied in the non-dialysis CKD (ND-CKD) population.4 Studies suggest that a substantial proportion of patients with ND-CKD may have iron deficiency, based on the findings of bone marrow biopsies and the conventional blood iron indices transferrin saturation (TSAT) and serum ferritin. Here are examples from the literature: 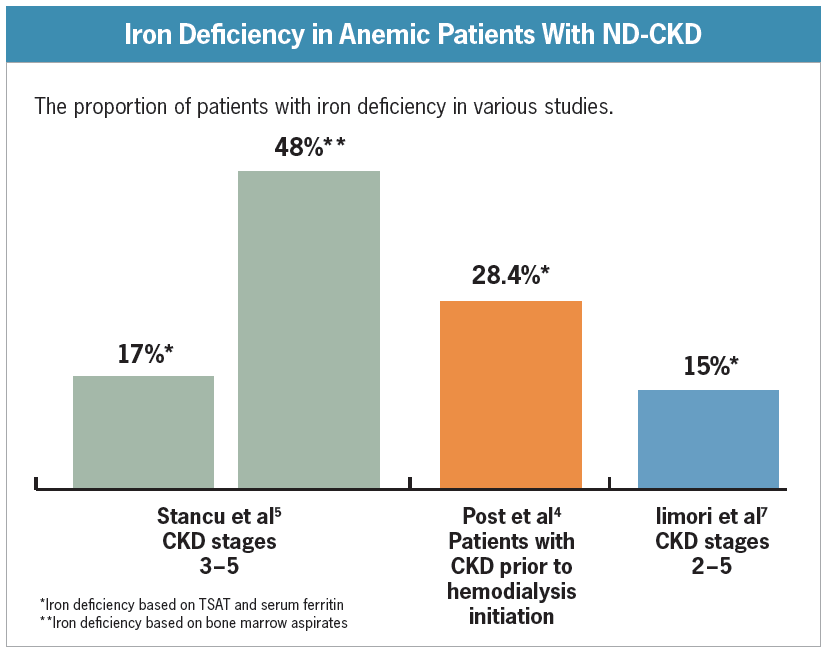 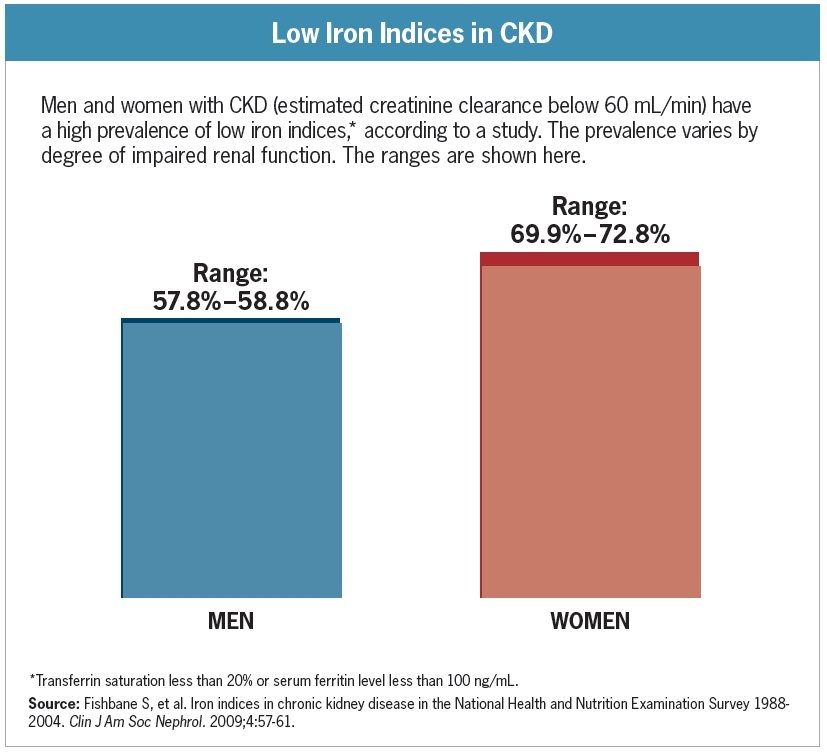 TSAT and serum ferritin are the most widely used laboratory parameters for assessing iron status, but both of these markers are subject to excessive biological variability and require caution when used to guide iron supplementation in patients with CKD.9 These markers show relatively poor correlation with bone marrow stores and erythropoietic response to iron treatment.1 Underlying inflammation, which is common in patients with CKD, complicates the diagnosis of iron-deficiency anemia. Inflammation increases levels of hepcidin, a peptide hormone synthesized mainly in the liver. It is a key regulator of iron metabolism that inhibits release of iron from macrophages and hepatocytes and blocks intestinal absorption of dietary iron. TSAT values usually are low (less than 20%) in patients with high hepcidin levels due to inflammation because iron is not released for binding to transferrin. Ferritin values rise to above 100 ng/mL, possibly indicating adequate body stores, the presence of inflammation, or both.1 Patients with functional iron-deficiency anemia respond to iron supplementation, which helps to distinguish it from anemia caused by inflammation.1 Szu-Chun Hung, MD, and Der-Cherng Tarng, MD, PhD, pointed out in an editorial in the American Journal of Kidney Diseases that bone marrow iron reflects stored iron, not the iron readily available for erythropoiesis in patients receiving ESAs. “To date, the only definite way to show functional iron deficiency in clinical practice is to evaluate the erythropoietic response to iron administration.”10

Although TSAT and serum ferritin are the most widely used iron biomarkers, other laboratory tests available to US clinicians may provide more accurate assessments of iron status. These include reticulocyte hemoglobin content (CHr), percentage of hypochromic red cells (PHRC), and soluble transferrin receptor (sTfR).

CHr is a measure of the hemoglobin content of reticulocytes, newly formed red blood cells (RBCs). As Jay B. Wish, MD, explained in a review article, CHr provides a “snapshot of how much iron was available for RBC production in a clinically relevant timeframe.”11

PHRC assays measure the hemoglobin concentration in erythrocytes rather than hemoglobin content. It takes into account the absolute amount of hemoglobin as well as the size of RBCs. As Dr Wish points out, the major impediment to the use of this test in the United States is that erythrocytes tend to expand during storage. Most of the large dialysis chains ship blood samples to national laboratories for analyses, and there is considerable storage time from when blood samples are collected until they are analyzed.11

The sTfR test is based on the fact that iron deficiency will cause erythroblasts in the bone marrow to increase presentation of membrane transferrin receptor. “If a patient is not receiving sufficient iron and erythropoiesis is being stimulated by an ESA, then increased transferrin receptors will become expressed on the erythroblasts, some of which come off and will be detectable in the circulation,” Dr Wish explained.11 As mentioned previously, elevated levels of hepcidin decrease absorption of dietary iron and impair release of iron stores in hepatocytes and macrophages. These elevated levels may be the result of underlying inflammation as well as diminished kidney function. As kidney function deteriorates, the ability to clear hepcidin may decrease, leading to higher hepcidin levels.12 Evidence suggests that hepcidin may be a useful biomarker of iron status. As Guido D’Angelo, MD, of Azienda Ospedaliera S.Antonio Abate di Callarate, Varese, Italy, observed in a review article,13 serum and urinary hepcidin concentrations in pure iron-deficiency anemia are significantly decreased and are even undetectable by some currently used methods. “Even in the absence of anemia, hepcidin appears to be a sensitive indicator of iron deficiency,” he noted. “Moreover, compared to hematocrit or hemoglobin, a decrease in hepcidin is an early marker of iron deficiency together with transferrin saturation and decreased ferritin.” The potential utility of hepcidin as a biomarker in kidney disease emerged from a study by Joshua Zaritsky, MD, et al.14 Theresearchers measured serum hepcidin in 48 pediatric patients with CKD stage 2–4 (PCKD2–4), 32 adult patients with CKDstage 2–4 (ACKD2–4), and 26 pediatric patients with stage 5 CKD on peritoneal dialysis (PCKD5D). Results showed significantly elevated hepcidin levels in all of the CKDgroups compared with healthy controls. Median hepcidin levels were 127.3, 269.9, and 652.4 ng/ mL in the PCKD2–4, ACKD2–4, and PCKD5D groups, respectively, compared with 25.3 and 72.9 ng/mL in the pediatric and adult controls, respectively. In PCKD2–4, only ferritin correlated with hepcidin. In ACKD2–4, ferritin and sTfR were associated with hepcidin, whereas GFR was inversely correlated.14 In multivariate analysis that incorporated all 3 groups, hepcidin was predicted by ferritin, C-reactive protein, and whether the patient had CKD stage 5D vs CKD stages 2–4.

“These findings suggest that increased hepcidin across the spectrum of CKD may contribute to abnormal iron regulation and erythropoiesis and may be a novel biomarker of iron status and erythropoietin resistance,” Dr Zaritsky and colleagues concluded.14

In a review article, Derek S. Larson, MD, and Daniel W. Coyne, MD, say hepcidin holds promise as an important biomarker of iron metabolism, but observed: “At present, the measurement of hepcidin is erratic and does not provide any current diagnostic value over ferritin and other available iron studies.”15

Another biomarker with potential usefulness in assessing iron status in patients with CKD is plasma neutrophil gelatinase-associated lipocalin (NGAL), a biomarker of acute kidney injury. A recent study showed that plasma NGAL was independently associated with TSAT and was superior to serum ferritin in both sensitivity and specificity in identifying iron deficiency in patients with pre-dialysis CKD.16 “The main finding in the present study is that the plasma NGAL is associated with iron indices and might be a more useful marker than serum ferritin for determining the iron status in pre-dialysis CKD patients,” the authors wrote.

Iron deficiency is common among patients with ND-CKD and anemia, but diagnosing it remains a challenge in many cases because of underlying inflammation that influences iron metabolism in a way that makes it difficult to interpret TSAT and serum ferritin values, the most widely used iron indices. Yet correction of iron deficiency, such as with iron supplementation, may be necessary for the successful treatment of anemia in a substantial proportion of the ND-CKD population. Thus, additional clinical considerations may be warranted for these patients. ■

Sponsored by Keryx Biopharmaceuticals, Inc.
*Keryx had partial editorial control over this content.
Next post in Chronic Kidney Disease (CKD)