Intensive lowering of systolic blood pressure (SBP) to less than 120 mm Hg may further reduce the risk of cardiovascular events and death among patients with mild to moderate chronic kidney disease (CKD) and hypertension, according to a new study.

The latest findings, published online in the Journal of the American Society of Nephrology, are from subgroup analyses of patients with pre-existing CKD (estimated glomerular filtration rate [eGFR] 20 to 59 mL/min/1.73m2) from SPRINT (Systolic Blood Pressure Intervention Trial). The investigators randomly assigned participants to a systolic blood pressure target of less than 120 mm Hg (intensive group; 1330 patients) or less than 140 mm Hg (standard group; 1316 patients). By design, those with diabetes or substantial proteinuria above 1 g per day were excluded.

CKD patients appeared to have benefits similar to those without CKD from the original SPRINT trial. After a median follow-up of 3.3 years, 112 intensive group and 131 standard group participants had a major cardiovascular event such as heart attack, acute coronary syndrome, acute decompensated heart failure, stroke, or heart-related death. The intensive group had a 19% lower relative risk, Alfred K. Cheung, MD, of the University of Utah, and colleagues reported. Targeting lower SBP reduced cardiovascular events in CKD patients aged 75 and older, similar to the original SPRINT findings.

The intensive group with CKD was 28% less likely to die prematurely from any cause. Patients without CKD from the original SPRINT who were treated to the lower target had a 27% lower risk of mortality.

End-stage renal disease or a 50% or greater decrease in eGFR occurred in 15 and 16 patients in the intensive and standard groups, respectively. The intensive group had a slightly higher annual rate of eGFR decline (0.47 vs 0.32 mL/min/1.73 m2 per year). All told, intensively lowering blood pressure did not slow kidney disease progression. Longer-term data still are needed, the researchers acknowledged.

“In people with CKD, lowering systolic blood pressure beyond the conventional goal reduced the risks of heart disease and death, but slightly hastened the decline in kidney function that often accompanies aging,” Dr Cheung, said in a news release.

“Therefore, our findings present the best available evidence to date in favor of intensive SBP reduction as a means to improve survival in patients with CKD and hypertension who are plagued with very high mortality rate,” Dr Cheung and colleagues stated.

George Bakris, MD, director of ASH Comprehensive Hypertension Center, University of Chicago Medicine, who was not involved in the study, offered a somewhat different interpretation of the findings.

“The observational data presented are very important. Renal SPRINT supports the concept that more aggressive lowering of blood pressure reduces all-cause mortality,” Dr Bakris told Renal & Urology News. “It is well known that people with stage 3b and 4 CKD have a 4- to 8-fold greater cardiovascular risk than people with stages 1 and 2. If blood pressure reduction was important, as it has been shown in many other trials, there should have been a greater benefit in the intensive group. There was a greater benefit in further reduction in all-cause death but not the primary endpoint or other cardiovascular event.”

He noted that the study was not sufficiently powered for a “hard renal endpoint.” Intensive blood pressure lowering did not further slow CKD progression, which confirms many previous reports of no further slowing of GFR decline at blood pressures below 130 mm Hg.

Although the overall rate of serious adverse events did not differ significant between groups, the intensive group was more likely to experience hypokalemia, hyperkalemia, and acute renal failure. Dr Bakris believes the adverse effects associated with intensive treatment are worrisome:

“Of concern was a higher incidence of acute kidney injury in the intensive group,” Dr Bakris said. “This needs careful scrutiny and evaluation, especially based on the loose definition of AKI. The changes in potassium are not difficult to anticipate, but the acute kidney injury requires far more attention. Aggressively lowering blood pressure is well known to reduce GFR more than a mild reduction in pressure, among people with low GFRs below 50 mL/min/1.72m2. However, there needs to be careful evaluation of who really developed AKI, what their volume status was, and over what time course.”

Finally, Dr Bakris wants clinicians to be aware that blood pressure is often measured differently in clinic, and may appear higher than in this trial. “The method of measuring blood pressure in this study, while correct, is not typically used in practice and yields systolic readings that are at least 7 to 10 mm Hg lower than in usual clinical practice.” 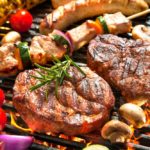