Hypokalemia increases the risk of death or hospitalization in CKD patients with heart failure (HF), according to researchers. Even a mild decrease in serum potassium level can increase mortality.

“Hypokalemia is common in heart-failure patients and is associated with poor outcomes, as is CKD,” said lead study author C. Barrett Bowling, MD, a fellow in the University of Alabama at Birmingham (UAB) Division of Gerontology, Geriatrics and Palliative Care. “But little is known about the prevalence and effect of hypokalemia in heart failure patients who also have CKD.”

He and his colleagues analyzed data from 1,044 patients with HF  and CKD in the Digitalis Investigation Group Study. They defined normokalemia as a potassium level of 4.0 to 4.9 mEq/L and hypokalemia as a level below 4.0. Patients with a level of 3.5 to 3.9 were considered to have mild hypokalemia.

The new paper is the first published report of an association between hypokalemia and poor outcomes in HF patients with CKD, Dr. Bowling noted.

Hypokalemia is a less common concern than hyperkalemia in CKD patients, so physicians may be underestimating its importance, Dr. Bowling told Renal & Urology News. CKD patients with HF should have their potassium levels monitored closely, he said.

The progressive deleterious effects of hypokalemia in this patient population may be mediated by aldosterone, which has been shown to cause myocardial fibrosis, diastolic dysfunction and disease progression in HF patients, the investigators stated.

“It has long been considered that high potassium levels were more common in heart failure patients with CKD,” said senior study author Ali Ahmed, MD, Associate Professor of Medicine at UAB. . “Our findings indicate that low potassium may be even more common in these patients, and clinicians need to be aware of the risks associated with even mildly low potassium levels and monitor and treat their patients accordingly.”

Dr. Bowling and his colleagues believe these new findings are important to clinicians because CKD patients with HF commonly require larger doses of diuretics, increasing their risk of hypokalemia. Hypokalemia in these patients, however, is more likely to be mild, which combined with the fear of causing hyperkalemia, may lead to under-treatment of this condition,  , they pointed out. 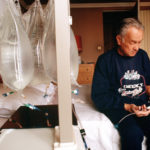 PD May Offer Better QoL to the Elderly