Previous studies have shown that F+V can effectively treat metabolic acidosis and slow progression of CKD. In addition, adding F+V to diets of patients with CKD can improve their cardiovascular disease (CVD) risk profile similar to what has been shown in non-CKD populations.

“We were able to ascertain the cost-effectiveness of the F+V intervention by looking at the overall population, not at individual participants,” Dr Wesson told Renal & Urology News. “The latter has implications that extend into policy as to what treatments we recommend for chronic diseases, in this case CKD.”

Further, he stated that diet should be considered foundational to the management of patients with CKD because of its potential to reduce mortality and morbidity. “Drugs should be considered adjunctive to diet,” Dr Wesson said. “Our current approach in the medical community is typically drugs first then diet added as adjunctive therapy if additional benefits are needed. The understandable challenge is to get patients to change their diets, something that we all recognize is very difficult to do.”

Clinicians should attempt to educate patients with CKD and their caregivers about the importance and benefits of dietary management of CKD, he added.

Jerry Yee, MD, chief of nephrology and hypertension at Henry Ford Hospital in Detroit, Michigan, called the findings of the new study highly relevant. “Many physicians would fear that the higher fresh fruits and vegetables diet would cause hyperkalemia. This did not occur,” Dr Yee said.

Sufficient data on the effectiveness of diets rich in fruits and vegetables in controlling metabolic acidosis are available to support widespread use of this approach, especially because such diets are healthier overall, he said.

Dr Yee pointed out that patients in the usual care group fared worse than those receiving sodium bicarbonate supplements, even though the sodium bicarbonate prescription was somewhat less than what is normally administered by nephrologists who do not prescribe F+V diets for patients with CKD and metabolic acidosis.

Nephrologist Leighton R. James, MD, a professor at the Medical College of Georgia at Augusta University in Augusta, Georgia, said he has some concerns about the current study because of its design. The study did not clearly show that the amount of bicarbonate received from F+V was equivalent to that received from sodium bicarbonate tablets, Dr James said. “This is important as several fruits in the F+V group contain citrate, which is converted to bicarbonate,” he explained. “Each citrate molecule generates 3 molecules of bicarbonate. So, the study would have to show that the amount of bicarbonate supplied by each intervention was equivalent.”

[In response, Dr Wesson said his team did match the amount of alkali being given in the F+V and sodium bicarbonate participant groups. “Not only was that the study design, this is supported by the fact that the net serum total CO2 intake was nearly identical between the F+V and NaHCO3 groups, supporting that they received the same amount of alkali.”]

Because the study could not be blinded, Dr James said, participants would know what they are receiving, and this could change their behavior. For example, participants might increase their physical activity or consume fewer calories, possibly contributing to a lower body mass index in the F+V group.

In addition, he noted, the study did not control for the effect of sodium from sodium bicarbonate supplements, which can impact blood pressure. “The differences in blood pressure and need for blood pressure medications may be related to sodium intake rather the F+V, which typically has more potassium and less sodium,” Dr James said. In terms of overall health score, the reduction in medication was considered as an improvement. However, he said it is not clear that the observed reduction was directly related to F+V or not controlling for other factors such as fat intake and the quantity of bicarbonate ingested.

[Dr Wesson noted that the statistical analysis did not account for fat intake among the three groups.]

Nephrologist Christopher Passero, MD, clinical assistant professor of medicine in the Renal-Electrolyte Division at the University of Pittsburgh in Pittsburgh, Pennsylvania, said the findings from the new study are similar those from prior studies suggesting that an alkali-producing F+V diet can achieve the same effects as alkali therapy to correct the metabolic acidosis seen in patients with CKD.

The meat-rich, high-protein diets common in the United States contribute to acid production, he said. Dietary modification involving increasing the proportion of fruits and vegetables could help individuals reduce daily protein intake. Generally, for patients with CKD, nephrologists recommend reducing protein intake to 0.6–0.8 g per kg body weight (which is about 2 portions of meat, 3 ounces each, per day for most people, or in the case of the current study, a vegetable equivalent), Dr Passero said. “It would be helpful if future studies described other considerations regarding diet, including sustainability, and avoidance of micronutrient and protein malnutrition.” 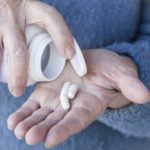 Prescription Analgesic Use High in the Elderly CKD Population