Increased dietary acid load is associated with progression of chronic kidney disease (CKD) in elderly patients, according to Japanese investigators.

Eiichiro Kanda, MD, MPH, PhD, of Tokyo Kyosai Hospital, and colleagues studied 217 CKD patients with an average age of 70.6 years. All patients were on a low-protein diet with normal serum bicarbonate levels. The primary outcome was a 25% decline in estimated glomerular filtration rate (eGFR).

The investigators grouped subjects into quartiles of net endogenous acid production (NEAP)—a measure of dietary acid load—every three months. Compared with patients in the lowest quartile of NEAP, those in the second, third, and fourth quartiles had a 3.9 times, 4.7 times, and 4.3 times increased odds of the primary outcome in adjusted analyses, according to a report in the American Journal of Nephrology (2014;39:145-152).

The study demonstrated that the hypoalbuminemia or hyperkalemia were associated with low serum bicarbonate and pre-existing conditions, but not NEAP.

At Kidney Week 2013, Tanushree Banerjee, PhD, of the University of California San Francisco, and colleagues presented study findings showing that higher dietary acid load is associated with the development of end-stage renal disease among patients with CKD. The study included 1,486 adults with CKD who participated in the National Health and Nutrition Examination Survey III.

ESRD developed in 311 participants (20.9%) during a median of 14.2 years of follow-up. Compared with subjects in the lowest tertile of net acid excretion (NAE), those in the middle and highest tertiles had a 3.8 times and 8.6 times increased risk for ESRD. For the study, the investigations ascertained NAE by 24-hour dietary recall questionnaire.

The risk associated with elevated NAE increased in a graded fashion with eGFR. Among subjects with an eGFR below 45 mL/min/1.73 m2, those in the middle and highest tertiles of NAE had a significant 9.4 and 13.8 times increased risk of ESRD compared with participants in the lowest tertile.

Among participants with an eGFR of 45 mL/min/1.73 m2 and higher, those in the middle and highest tertiles of NAE had a significant 5.7 and 7.6 times increased risk compared with subjects in the lowest tertile. 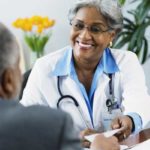