Over the past 3 decades, the burden of chronic kidney disease (CKD) has increased globally, even while the prevalence of some major diseases have declined. Deaths from CKD also continue to rise.

CKD mortality increased 41.5% from 1990 to 2017, rising from the 17th leading cause of death to the 12th. In 2017, 1.2 million individuals died from kidney disease. An additional 1.4 million deaths from cardiovascular disease were attributed to impaired kidney function, defined as low estimated glomerular filtration rate (eGFR) or elevated urinary albumin to creatinine ratio (UACR) without renal replacement therapy. Together, CKD and related cardiovascular disease deaths accounted for 4.6% of total mortality.

Diabetic nephropathy was responsible for almost one third of disability-associated life-years (DALYs). Countries with the 3 lowest quintiles of socio-demographic index experienced the highest DALY rates.

“Importantly, CKD has continued to rise in rank among leading causes of death over the 27-year period studied, because of ageing and an increasing burden of risk factors for CKD (including diabetes and hypertension) that, together, contributed to more than half the deaths from CKD in 2017,” Theo Vos, MD, PhD, of the Institute for Health Metrics and Evaluation in Seattle, and colleagues wrote.

“A comprehensive action plan should include effective management of risk factors for CKD at the primary care level, improved case-detection among at-risk populations, and development of facilities for treating patients with documented disease.” 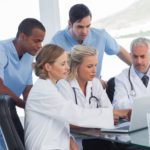