Chronic kidney disease (CKD) is associated with an increased risk of tinnitus, researchers reported online in PLoS One. 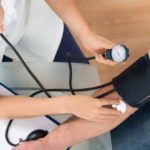