Chronic kidney disease (CKD) progresses more slowly in women than men, according to a new study.

In a study of 3939 adults to mild-to-moderate CKD, women had a significant 28% decreased risk of end-stage renal disease (ESRD) and 18% decreased risk of a 50% decline in estimated glomerular filtration rate (eGFR) from baseline compared with men, in a fully adjusted model, a team led by Ana C. Ricardo, MD, of the University of Illinois at Chicago, reported in the Journal of the American Society of Nephrology. Women also had a significant 44% lower risk of death from any cause.

The investigators observed no significant difference in the annual rate of eGFR decline between the sexes.

The study included 3939 adults with mild-to-moderate CKD (1778 women and 2161 men) enrolled in the Chronic Renal Insufficiency Cohort (CRIC) Study. Investigators enrolled patients at 7 clinical center in the United States. A total of 844 ESRD events and 853 deaths occurred during a median follow-up of 7 years.

“The findings of our study need to be interpreted in light of its limitations,” the authors cautioned. “The CRIC Study did not use a population-based sample strategy; therefore, it is possible that the risk for CKD progression differs between men and women enrolled in the study compared with those not enrolled.”

They noted, for example, that it is well known that CKD awareness is lower among women than men, and women are less likely to undergo CKD screening or have nephrology consults after being diagnosed with CKD. Consequently, they wrote, their clinic-based sample of women might have had a lower risk profile compared with women not recruited into the study. 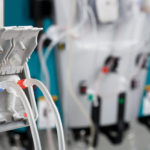