Patients with chronic kidney disease (CKD) are at increased risk for cancer compared with the general population, according to a recent report.

Gastrointestinal cancers were the most common malignancies diagnosed followed by prostate cancer and other urinary tract cancers, Ketki K. Tendulkar, MD, of the University of Nebraska Medical Center in Omaha, and colleagues reported in PLoS One. Risk factors for cancer in patients with CKD included increasing age, male sex, and worsening CKD.

Patients aged 80 years or older had a 3.3-fold greater risk for cancer compared with those younger than 50 years, according to the investigators. Men had a 1.4-fold higher risk compared with women. Compared with patients with an estimated glomerular filtration rate (eGFR, mL/min/1.73 m2) more than 60, those with an eGFR less than 30 also had a 1.4-fold increased risk for cancer. The presence vs absence of diabetes was associated with a 10% lower risk for malignancy.

That 22% figure, the authors noted, “is higher than the reported lifetime risk of cancer in the general population in this age group.”

The study’s retrospective design is its main limitation, the investigators acknowledged. “Another limitation is that it is a single institution study and hence these findings will need to be confirmed in other settings.”

They added, however, that “given the large cohort of patients and the long follow-up duration, these findings appear to be robust.”

The investigators identified patients for their study using the Clinical Research Analytics Environment database, which is funded by the National Institute of General Medical Sciences. 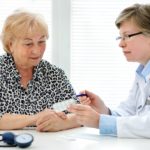