The absolute risk reduction was more pronounced among patients in the lowest eGFR and highest albuminuria category who were at highest baseline risk, investigators reported.

In addition, the relative and absolute risks for heart failure hospitalization were similar across baseline UACR and eGFR subgroups.

“Understanding the benefits and risks of ERAs in specific patient subgroups will guide appropriate use of ERAs in clinical practice,” a team led by Hiddo J.L. Heerspink, PhD, PharmD, of University Medical Center Groningen in Groningen, The Netherlands, wrote in the Clinical Journal of the American Society of Nephrology. “Because the absolute benefit (reflected in kidney failure) was higher at advanced stages of CKD but absolute risk (reflected in heart failure) was not, the overall benefit-risk ratio of atrasentan was favorable even in patients with advanced CKD.”

The findings are from a post hoc analysis of the SONAR (Study of Diabetic Nephropathy with Atrasentan) randomized trial, which included 3668 patients with type 2 diabetes and CKD with elevated albuminuria. The study examined the effect of atrasentan compared with placebo on the primary kidney outcome (a composite of doubling of serum creatinine, kidney failure, or kidney death) and heart failure hospitalization across subgroups of UACR and eGFR. The median follow-up was 2.2 years.

Atrasentan significantly decreased the relative risk of the primary kidney outcome by 29% compared with placebo regardless of subgroup of baseline eGFR and UACR.

“Our first major observation was that atrasentan’s efficacy in reducing the relative risk of doubling of serum creatinine or kidney failure was preserved in patients with the lowest levels of eGFR and highest albuminuria,” the authors wrote. 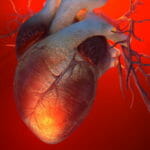 Empagliflozin: Cardio-Renal Benefits in HF, LVEF Above 40% Regardless of CKD Status