(HealthDay News) — The incidence of myocardial infarction (MI) is higher in men than women, but several risk factors are more strongly linked to MI in women, according to a study published online in The BMJ.

Elizabeth R.C. Millett, PhD, from the University of Oxford in the United Kingdom, and colleagues conducted a prospective population-based study involving 471,998 participants with no history of cardiovascular disease to examine sex differences in risk factors for incident MI.

The researchers found that 5081 participants (28.8% women) had MI during a mean follow-up of 7 years, for an incidence of 7.76 and 24.35 per 10,000 person-years for women and men, respectively. Increased risk for MI in men and women was seen in association with high blood pressure indices, smoking intensity, body mass index, and presence of diabetes; the associations were attenuated with age. Compared with men, women had higher hazard ratios for MI in association with systolic blood pressure, current smoking, and diabetes, with hazard ratios of 1.09, 1.55, 2.91, and 1.47 for systolic blood pressure, current smoking, type 1 diabetes, and type 2 diabetes, respectively. None of these hazard ratios decreased with age. The incidence of MI was higher in men than women for all risk factors except type 1 diabetes.

“Our findings suggest that clinicians should be vigilant when their female patients are elderly, smoke, have diabetes, or have high blood pressure,” the authors write. 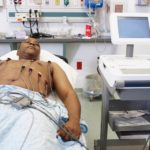