(HealthDay News) — Exposure to certain nonessential metals is associated with an increased risk for atherosclerosis, according to a study published online in Arteriosclerosis, Thrombosis, and Vascular Biology.

The researchers found that the adjusted odds ratios for subclinical atherosclerosis presence in at least one territory were 1.25, 1.67, and 1.26 for arsenic, cadmium, and titanium, respectively. In femoral, carotid, and coronary territories, these associations were driven by arsenic and cadmium, cadmium and titanium, and titanium, respectively; after additional adjustment for other relevant metals, they mostly remained. With alternative definitions of increased coronary calcium, positive associations were also seen for titanium, cadmium, and antimony. An interaction between arsenic and the joint cadmium-titanium exposure was suggested in an analysis simultaneously evaluating metal associations.

“Our study strengthens the evidence in favor of arsenic and cadmium as proatherogenic risk factors, even at markedly low levels of exposure, and identifies the exposure to titanium and potentially antimony, as novel risk factors for atherosclerosis,” the authors write. 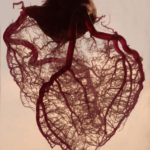