A recently published report describes the case of an 88-year-old female patient who experienced drug-induced syndrome of inappropriate antidiuretic hormone (SIADH) due to the combination of naproxen and citalopram and highlights the importance of performing medication reconciliation to prevent adverse drug events.

The patient, who had a history of asymptomatic chronic hyponatremia, presented to the emergency department (ED) complaining of generalized body ache. She additionally stated that she had been experiencing nausea, decreased appetite, and malaise the 4 days prior to her presentation.

Her medical history included hypertension, depression, and osteoarthritis  for which she was prescribed amlodipine 10mg daily, losartan 50mg daily, citalopram 20mg daily, and naproxen 250mg every 8 hours as needed. The patient noted that she was initiated on naproxen by her primary care physician 2 weeks prior to her presentation as acetaminophen, which she had been taking for more than 5 years, was not providing pain relief any longer.

Upon admission, the patient had a serum sodium of 113 mmol/L, a urine sodium of 120 mmol/L, and urine osmo­lality of 487 mOsm/kg. It was noted that her sodium level 10 months prior was 129 mmol/L.  Based on her physical exam and other laboratory testing (ie, cortisol level, thyroid-stimulating hormone, pro-BNP, creatinine, liver enzymes, serum albumin, cholesterol; all within range), she was diagnosed with SIADH.

The offending agents, citalopram and naproxen, were discontinued and fluid was restricted to 1 L per day. “Instead of using hypertonic saline in our case, we decided to start fluid restriction alone at the beginning because of ad­vanced age (which entails higher risk for osmotic demyelin­ation syndrome), chronic hyponatremia, and relatively stable clinical condition,” the authors explained.

On day 3 of her stay, the patient’s serum sodium level remained unchanged since admission and she experienced worsening mental status. She was then initiated on 2g sodium chloride tablets twice daily and her fluid was further restricted. On day 10 of admission, the patient’s serum sodium was reported to be 131 mmol/L and the sodium chloride tablets were discontinued. She was discharged on day 14 to a subacute rehabilitation center.

After an inpatient psychiatric evaluation determined that an antidepressant was not necessary at the time, the patient was discharged on amlodipine 10mg daily, losartan 100mg daily, and meloxicam 15mg daily. She was advised to continue to limit fluid to 1 L per day.

“In our case, laboratory evaluation led to the diagnosis of SIADH, and the history of presenting illness pointed towards a medica­tion adverse effect as the culprit,” the study authors stated. They concluded, “When faced with hyponatremia in an elderly patient, medication reconcil­iation should be one of the initials steps in the assessment.” 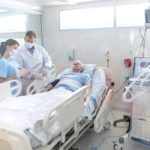 AKI Occurs in 7 Percent of Those Hospitalized With COVID-19