Investigators found increased risk for all-cause mortality by 21%, 10%, and 9% for the functional iron deficiency, low, and high iron groups, compared with the referent, over 4 years of follow-up. Those with and without diabetes had similar death risks within each iron group.

“Our data support previously published studies that iron deficiency increases mortality risk independent of anemia in non-CKD populations, given that hemoglobin level was well matched among the iron groups in our study,” Dr Cho and her colleagues wrote in Kidney International.

The results have important implications for iron management in CKD, even prior to development of anemia. “Given our result that iron deficiency is associated with mortality independently of hemoglobin levels in CKD, and given the similar finding in HF [heart failure], early screening of iron indices may improve CV [cardiovascular] risk assessment and optimization of treatable CV risk factors in pre-dialysis CKD.”

It remains unclear whether iron, rather than inflammation, leads to increased mortality. 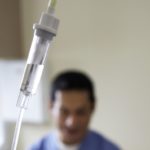