Drug-induced acute interstitial nephritis (AIN), primarily from the use of proton-pump inhibitors and antibiotics, is significantly more common in the elderly than in younger individuals, according to a new study. The elderly, however, are less likely to have AIN from autoimmune or systemic causes.

Angela K. Muriithi, MD, of Mayo Clinic in Rochester, Minn., and colleagues examined the characteristics, causes, and outcomes of AIN—an important cause of acute kidney injury (AKI)—in 45 patients aged 65 years and older and 88 younger patients (aged 18–64 years). Drug-induced AIN occurred in 87% of the elderly patients compared with 64% of the younger patients, according to an online report in Kidney International.

The elderly had a higher prevalence of chronic kidney disease at baseline, higher peak creatinine, and greater need for dialysis compared with the younger patients. Among the elderly, 86% showed partial or complete recovery within 6 months. 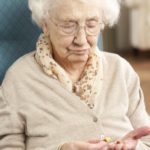