Caffeine may offer a way to reduce the risk and severity of acute kidney injury (AKI) in preterm neonates, new research findings suggest.

In a multicenter study of 675 preterm neonates (gestation less than 33 weeks), a team led by Jennifer R. Charlton, MD, MSc, of the University of Virginia in Charlottesville, found a significant 80% reduction in the odds of developing AKI among neonates administered caffeine compared with those who were not in adjusted analyses. The investigators calculated that 1 case of AKI was prevented for every 4.3 neonates exposed to caffeine. In addition, among neonates with early AKI, those who received caffeine had a significant 80% decreased odds of progressing to stage 2 or 3 AKI.

“Because of the benefits and favorable adverse effect profile of caffeine, it may be reasonable to consider routine use of prophylactic caffeine in neonates of 28 and 32 weeks’ gestational age to prevent or reduce AKI, even when apnea of prematurity or the need for positive pressure respiratory support is absent,” Dr Charlton’s team concluded in a paper published online ahead of print in JAMA Pediatrics.

The investigators noted that AKI is a common occurrence in preterm neonates and it is associated with increased morbidity and mortality. For the study, the investigators defined AKI based on the modified neonatal Kidney Disease: Improving Global Outcomes definition in the first 7 days after birth. 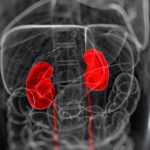