Anup P. Chaudhari, MD, of Lilavati Hospital and Research Centre in Mumbai, and colleagues examined fluid balance and other clinical and laboratory data for 130 adult patients with or at risk for AKI from the intensive care unit (ICU) through discharge, 60 days after admission, or death within 60 days of hospital discharge, whichever occurred first. Most had injury or failure by RIFLE criteria. The investigators calculated daily fluid balance as the difference between fluids given (i.e., intravenous, blood, enteral, and renal replacement fluids) and fluids lost through ultrafiltrate from renal replacement therapy (RRT), urine, and drainage.

Patients with a positive fluid balance fared worse: They had a longer ICU stay and more often required mechanical ventilation and inotrope, and for longer periods. Most importantly, mortality was significantly higher: 43.5% vs 7.4%. The investigators similarly determined that negative fluid balance was independently associated with reduced mortality, ICU stay, and need for ventilator and RRT.

“The consistent association between a positive FB and unfavorable outcome suggests the need to exert prudence with fluid administration in patients with AKI,” Dr Chaudhari and colleagues stated.

The researchers also noticed that RRT started early after ICU admission was associated with better outcomes, in agreement with recent research.

The current study was limited by the small number of participants and lack of a control group without AKI. 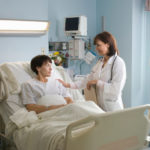