In the STARRTAKI trial (Standard versus Accelerated Initiation of Renal-Replacement Therapy in Acute Kidney Injury; NCT02568722), investigators randomly assigned 1465 and 1462 patients from 168 intensive care units in 15 countries to accelerated RRT (within 12 hours) or standard RRT initiation, respectively. Selected patients had neither indications for emergency RRT nor the prospect of imminent renal recovery. In the standard approach, RRT was discouraged unless conventional indications developed (eg, acidosis, hyperkalemia, or respiratory failure with volume overload) or AKI persisted for at least 72 hours. The decision to start RRT or not was at clinicians’ discretion.

“In critically ill patients with severe acute kidney injury, an accelerated strategy for the initiation of renal-replacement therapy did not result in a lower mortality at 90 days than a standard strategy,” Sean Bagshaw, MD, of the University of Alberta in Edmonton, Alberta, Canada, and collaborators reported.

Surviving patients in the accelerated-strategy group were 1.7-fold more likely to continue to be RRT-dependent (10.4% vs 6.0% were dependent at 90 days, respectively). In addition, a greater proportion of the accelerated-strategy group than the standard-strategy group experienced adverse events (23.0% vs 16.5%), particularly hypotension (8.7% vs 5.6%) and hypophosphatemia (7.5% vs 4.2%). Less than half of both groups had pre-existing chronic kidney disease (44.9% vs 42.8%, respectively); none could have advanced kidney disease, per protocol.

“This finding suggests that greater exposure to renal-replacement therapy, possibly modified according to baseline risk (e.g., the presence of chronic kidney disease) or mediated by iatrogenic factors (e.g., hypotension), may compromise kidney repair and the return of endogenous kidney function,” Dr Bagshaw and colleagues wrote. 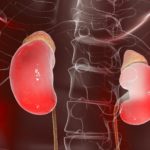