When choosing where to set up a practice, physicians must consider much more than average malpractice insurance rates and Geographic Practice Cost Indices (GPCI). Every year, several lists are published picking the top states in which to practice medicine. Malpractice insurance premiums vary significantly between states. What is best for one clinician might not be quite as important for another, however, especially at different stages of their career.

“When comparing factors like annual physician pay, pay growth potential, cost of living, affordability, and access to recreation and entertainment, some cities score dramatically higher than others,” said Christopher R. Friese, PhD, RN, Health Management & Policy Director at the Center for Improving Patient and Population Health at the University of Michigan in Ann Arbor, Michigan.

Recently, WalletHub compared the 50 states and the District of Columbia across 19 key metrics. The data, which were released in March, included the average annual wage for physicians, hospitals per capita, and the quality of the public hospital system. The top 5 states were South Dakota, Minnesota, Wisconsin, Montana, and Idaho. There may be other factors, however, that are not included in these lists of best cities in which to practice medicine.

While contentious in some circles, Dr Friese said there are major advantages in the states that allow full scope of practice for advanced practice nurses and physician assistants because clinicians can focus on new and complex patients and allow the team to provide all the services needed. Physicians interviewing for positions should ask about the staffing model in the practice. Dr Friese said it is important to look at how many nurses and how many medical and nursing assistants are part of the practice. Has the level of supportive staffing been the same for a steady period of time?

If not adequately staffed by a supportive team, the workloads will be significantly higher, he said. An important factor is the percentile of nurse staffing levels compared with benchmark facilities. “For physicians exploring new opportunities, consider your surroundings and what kind of team will be available to support you in delivering the best care for your patients and reducing the likelihood of burnout,” Dr Friese said.

Michael French, MA, practitioner in residence at the University of New Haven’s School of Health Sciences in West Haven, Connecticut, applies philosophical methods for understanding the experiential aspects of mental illness, ethical issues in treatment, and uses of technology and data in healthcare. He said the first criteria should be what is best for the clinician’s family and themselves. “Burnout is prevalent among physicians, and keeping yourself and your family in an area where you can thrive will aid you in keeping your health in order,” French said. “The second criteria I would recommend is that you look for states where you align with the state’s medical politics.”

Medical politics have come to forefront in the last 3 years and some fields of medicine are being highly impacted, French said. Medical politics are playing a major role in areas of reproductive health, with scores of new abortion laws and other restrictions. French said some states and cities were much more politically influenced when it came to mask wearing and other actions required during the COVID-19 pandemic.

If a physician is starting their own practice, he recommends carefully considering whether they are ready for the business management and the accounting departments required. Overall, private practices have been decreasing, with 2021 being the first year the American Medical Association (AMA) recording more doctors working outside of private practice than within. The AMA’s most recent survey showed that 70% of doctors under the age of 40 are working for someone else.

The economic expansion of hospital networks mirrors the process that has occurred in the corporate world, according to French. Large companies are expanding to include private practices in their network as well as buying other hospitals to include in their systems. “To run a practice within the network of a hospital can be a useful addition for some, as doing so can make many processes more convenient, but for those who want to run their own practice without potential interference, it may be unwelcomed,” French said. “I believe that it can be a great time to run a medical practice, but it is a far different time to run one than it was even a decade ago.”

Jonathan Henderson, MD, immediate past president of LUGPA, an organization that represents urologists in large independent practices, said establishing an independent practice today is more difficult than ever before in the modern era. The reasons are many and apply to all settings, including independent practice, hospital employment, and academic settings. “The patient backlog from 2 years of the pandemic is daunting, and the shortage of providers is more critical than ever and heightens daily,” Dr Henderson said. “There is a national labor shortage, and supply chain disruptions continue to be compounded in unexpected ways.”

Ron Holder, Chief Operating Officer of the Medical Group Management Association, said currently licensed vocational or licensed practical nurses are being recruited away from practices by health care and non-health care organizations. That needs to be considered when looking at different cities to establish a medical practice.

“Retail and restaurants alike are offering starting pay in excess of what some practices pay for front desk, back office, or clinical support staff,” Holder said. “Urology practices have an additional competitive hurdle on top of that. Whereas many practices rely on medical assistants and licensed vocational nurses, urology practices tend to have a greater need for registered nurses due to the procedures and other duties that require a higher level of licensure.” 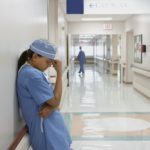