Most medical malpractice cases in the United States are dismissed before trial, but even so, cases often linger for months or years before dismissal.

A recent study, published in the Archives of Internal Medicine (2012;172:892-894), revealed new information on the proportion of medical malpractice claims resulting in litigation, litigated claims and resolution according to specialty, and the timeframe for resolving varying types of claims.

Researchers, led by Dr. Anupam B. Jena, of Massachusetts General Hospital and Harvard Medical School in Boston, examined over 10,000 malpractice claims against physicians that were resolved between 2002 and 2005. Only 55% of the total claims resulted in actual lawsuits.

Of those lawsuits, over half were dismissed by the court. Most of the remaining lawsuits were resolved prior to trial, and of those that went to court, less than 5% ended with a verdict. Verdicts went in favor of the physician approximately 80% of the time, the study showed.

According to Dr. Jena, what was most striking in the findings was the length of time it took for liability cases to be resolved—even cases that were dismissed. On average, malpractice suits took over 20 months to be dismissed by the court. Litigated suits that were resolved pre-verdict took more than 28 months to come to a point of decision. And cases that went through a full trial typically took over three years—39 months on average—when they resolved in favor of the physician, and almost four years—44 months—when the patient was the victor.

The study also looked at the degree to which specialization affected liability actions. Internists and medicine-based subspecialists had the highest rate of dismissals (61.5%), whereas pathologists were least likely to have cases dismissed (36.5%).

Dr. Jena noted that this finding was not a surprise, as pathology lawsuits generally stem from the failure to diagnose a disease.

Furthermore, the study showed that the frequency of claims ending in a trial verdict was low across specialties. Internists were not likely to face a jury with only 3 % of their malpractice cases ending in a verdict. Falling beneath them were anesthesiologists with a mere 2% of their cases ending in a jury decision.

The study results were consistent with previous studies on medical liability resolution. “Part of what is surprising is how long this whole process takes,” said Dr. Jena. “When court cases last a long time, two groups of people are hurt—both patients and physicians. It’s also very difficult for physicians who have a malpractice case looming over their heads.” 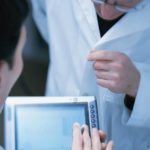