In a stunning defeat for Republican legislators, North Carolina Governor Bev Perdue (D- N.C.) vetoed Senate Bill 33, a medical malpractice reform bill that would have capped noneconomic damages at $500,000, regardless of injury. Many opponents challenged the bill, including a physician who appeared in television ads and press releases.

The bill’s specific language capped damages for pain and suffering at $500,000 even for death, paralysis, brain damage and severe disfigurement, unless the patient were able to prove reckless disregard, gross negligence or intentional malice.

“I commend the legislature for addressing this important issue but, in its current form, the bill is unbalanced. I urge legislators to modify the bill when the General Assembly returns in July to protect those who are catastrophically injured,” Perdue said. “Once the bill is revised to adequately protect those that are catastrophically injured, I will proudly sign it into law. I pledge to continue working with the General Assembly to achieve a comprehensive, bipartisan consensus.”

The bill is now scheduled to return to the Senate. 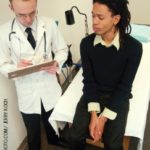