It’s rare to find physicians and trial attorneys supporting the same medical malpractice reform bill, but that is what has happened in Oregon.

Senate Bill 438, backed by Oregon’s Governor John Kitzhaber, proposes that the Oregon Patient Safety Commission be a forum for discussion and possible mediation of malpractice incidents. Kitzhaber, who is a physician, convened a work group to study the situation last year and provide recommendations. In testimony to the Senate Judiciary Committee, Kitzhaber stated that the new bill “focuses both on improving patient safety and improving the practice environment and culture of medicine.”

The new legislation proposes that prior to a lawsuit being filed, the parties involved in a medical malpractice situation may sit down and discuss it openly and frankly, and an offer of compensation can be made. Any discussions that take place during these conferences are confidential, although the commission may use information to improve safe medical practice. A professional mediator may be used to help the parties resolve their differences.

The proposed program is completely voluntary; patients with malpractice cases may head straight to court if they would rather not participate in the program. If they do attempt to resolve the issue by mediation and it fails, discussions that took place as part of the program are not admissible in court.

The bill has been endorsed by both the Oregon Medical Association and the Oregon Trial Lawyers Association—two organizations that have historically been at odds over how medical liability reform should be handled. Kitzhaber called the mutual endorsement “the holy grail of medical and legal politics,” and went on to say that the bill will “definitely benefit the practice of medicine.”

The legislation is targeted at reducing medical malpractice claims, but it does not put any restrictions on the amount of money a jury can award for medical errors. Because of this, not everyone is happy with the plan. “I support the efforts that went into the development of Senate Bill 483, but I don’t want it to foreclose on addressing the issues of liability reform,” said James Dorigan, senior vice president of The Doctors Company which insures about 40% of Oregon physicians.

Dorigan expressed concern that the bill could result in higher administrative costs for insurance companies and may increase premiums for physicians. In addition, the Oregon American Association of Retired Persons expressed concerns about safeguards for individual patients who enter the medication process. 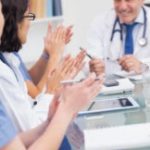