Many individuals aged 60 years or older lack access to digital health information (DHI), and this lack of access varies widely by race, ethnicity, and income, according to a recent study.

Investigators at Florida Atlantic University in Boca Raton, Florida, in collaboration with colleagues at the Dana-Farber Cancer Institute in Boston, Massachusetts, and the University of Massachusetts Medical School in Worchester, examined the extent of computer ownership, internet access, and DHI use among older adults. They surveyed 562 multiethnic community-dwelling individuals aged 60 years or older in South Florida. The group that included 100 Black, 113 Afro-Caribbean, 129 Hispanic, and 220 White individuals. The investigators also conducted 4 focus groups with 49 individuals aged 60 years or older.

Study findings, which were published in Journal of Racial and Ethnic Health Disparities, revealed a deep digital health divide within the older population, which was evident in both a community sample and focus groups.1

“We did expect to find some differences across income and ethnic group membership, but the disparity was deeper and wider than we’d expected,” said lead study author Ruth Tappen, EdD, RN, of the Florida Atlantic University’s Christine E. Lynn College of Nursing.

“The very old patient of any ethnic group or income likely did not have the opportunity or need to become computer literate during his or her working years and may still not be computer literate,” Dr Tappen said.

The investigators found a similar pattern with respect to use of the internet for health-related information, albeit with lower proportions: 54% for Whites, 34% for Blacks, 26% for Afro-Caribbeans, and 23% for Hispanics.

The likelihood of computer ownership varied significantly by Medicaid status. One-third of participants on Medicaid owned a computer compared with two-thirds of those not on Medicaid.

Findings from focus group sessions also highlighted some differences. Interest in obtaining health-related information via the internet was highest among the Blacks, Afro-Caribbeans and Whites. It was moderate at best in the Hispanic American group. Blacks and Afro-Caribbeans expressed frustration with lack of access to DHI, but appreciated alternative sources of information. White participants evaluated various DHI websites, looking to providers for help in applying information to their personal situation.

The investigators stressed that addressing the digital health divide in older populations would require greater effort to provide universal internet access, noting that municipal broadband networks can achieve this at the local level. Dr Tappen and her colleagues contend the internet is a necessary utility like electricity and water. They suggest it should be a free service supported by advertisements, like broadcast radio and television.

“Currently, it is becoming very evident that even making an appointment for the COVID vaccine via online websites, even when they are user friendly, has disenfranchised the old-old, those without internet, and those who are not computer literate,” Dr Tappen said. “As one colleague said, people have ‘needed a car and a computer’ to get the vaccine. This is being addressed for COVID, but we need to address it for other medical needs also.”

Until internet access is universal, Dr Tappen said, creative use of printed materials, telephone calls, in-person groups, family assistance, individual meetings, and mailings are needed for those disadvantaged and minority older adults who remain affected by this DHI disparity. “It is time to place the patient in the center of integrated healthcare systems, not at the periphery with technology facilitating the operation of the system,” Dr Tappen and her collaborators wrote.

Chad Ellimoottil, MD, director of the Institute of Healthcare Policy and Innovation’s Telehealth Research Incubator at the University of Michigan in Ann Arbor, said access to DHI leads to better informed patients and shared decision-making, ultimately improving the patient experience. “There is a risk for the digital health divide to become worse as healthcare providers are increasingly using telehealth, such as video conferencing, email, and portal messaging to engage with patients,” Dr Ellimoottil said. “Digital health disparities tend to impact older, minority, rural and low income patients the most. Closing the gap requires investment.”

He suggests that healthcare systems spend time and resources for improving the usability of the health technology that they offer. The first step is to gather feedback directly from patients, Dr Ellimoottil said.

Ashwini Nadkarni, MD, a psychiatrist at Brigham and Women’s Hospital in Boston, Massachusetts, said the digital divide affects access to virtual care for the most vulnerable patients. According to current research on device usage in the United States, 29% of adults with household incomes below $30,000 a year do not have a smartphone, and 44% do not have home broadband services, and 46% do not own a traditional computer.2 A majority of lower-income Americans are not tablet owners. As a result, access to vital medical care is limited. 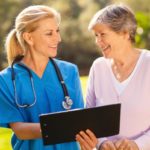 Willingness to Get COVID-19 Vaccine Up in Health Care Workers