For years, the Centers for Medicare & Medicaid Services (CMS) has worked with members of its CROWNWeb support teams to review federal rules and regulations pertaining to electronic data submission; system and business requirements; and user feedback to identify necessary updates and enhancements to the agency’s CROWNWeb data collection system.

As part of an effort to help ensure that CROWNWeb contains the features and functionality necessary for users to meet administrative and clinical data submission requirements, CROWNWeb has seen four major revisions since its National Release in June 2012.

While most of the changes to CROWNWeb have been to provide “behind the scenes” support to improve the system’s data processing capabilities, or to enable data reporting fields for annual use (i.e., the enabling of the Facility Attestation fields each year to support the End-Stage Renal Disease Quality Incentive Program), these releases have also introduced new functionality that has streamlined how users are able to gather and report data in CROWNWeb.

A Step in the Right Direction

CROWNWeb Version 4.4 and CROWNWeb Version 4.5 have been well received by users, because both releases boasted many features requested by facility-level users since the system originally debuted as part of a phase-in pilot in 2009.

CMS constantly receives requests to include additional functionality in CROWNWeb.  “Can you add the ability to save data entries on the Clinical screens in CROWNWeb?” “Can CROWNWeb present the ability to indicate that lab data was not drawn for a particular patient during a reporting month?”

“Can we have access to Missing Forms reports at the facility-level?” These are examples of some of the questions submitted to CMS that resulted in practical changes to the functionality of the system.

Before any enhancement or change request can be applied to CROWNWeb, it is reviewed for user and system impact, scored to determine both the level of importance and potential implementation timeframe, and tested to determine if the development meets the identified need.

If the request passes these criteria, only then may the updates be approved by CMS for release. (See Figure 1 for a snapshot of the CROWNWeb Updates review and deployment process.)

The interface of CROWNWeb is often updated in accordance with user requests.  After going through CMS’ detailed review and testing process, many fields, menus, and selections in CROWNWeb were simplified (especially on the Clinical screens) and fields have been added or removed to help reduce burden and improve data quality. 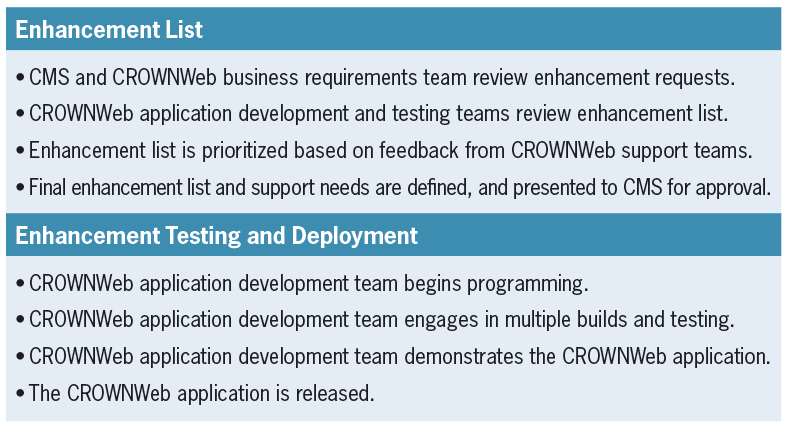 The following updates were added to CROWNWeb over the two release cycles in 2014:

For years, CROWNWeb has featured “Save” buttons on the CMS-2728 and CMS-2746 screens to allow users to save their work for each form.  Users can then return and complete the forms before printing them for necessary signatures and/or to include with patients’ records.

CROWNWeb was updated to feature a “Save” button on each Clinical screen—allowing users to stop clinical data entry efforts at any point, save the information entered, and return at a later date to finish. Saved data can be updated at any time, provided that the clinical month is still open.

When a user saves clinical data, system validation is not performed. Instead, the system conducts its data validation at the time of submission. It presents error messages for missing and/or unselected entries, and warning messages for data that is outside of a predetermined or expected range.

Further, in order for a facility to comply with CMS’ data submission requirements, its users must work to submit all missing and saved clinical data entries before the closure of that reporting month. (See Table 1 for the 2015 CROWNWeb clinical closure months announced by CMS on September 19, 2014.) 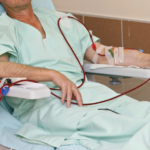