Patients and physicians often make treatment tradeoff decisions based upon a complex series of subjective and imperfect assessments.

One example is in patients with absolute or mandatory indications for nephron-sparing surgery (NSS).

In such cases, the decision to either remove a kidney or to perform complex partial nephrectomy for presumed renal cell carcinoma (RCC) must be weighed against the functional implications of progressive CKD and potentially dialysis.

At times, these decisions can mean a real tradeoff between two undesirable choices—assuming the risks of cancer or assuming those of dialysis.

Educating and risk-stratifying such patients require a urologist’s understanding of the natural history of disease, competing risks, and morbidities of interventions, including minimally invasive ablative and extirpative approaches. Similarly, such decisions require insight into the natural history and tolerance of comorbid patients on hemodialysis.

To decide between intervention and observation, we have operationalized point-of-care prediction tools using published predictive models and nomograms (www.cancermonograms.com). Given that the preponderance of data favor the use of NSS in most cases of T1 and even T2  RCC, we emphasize nephron-sparing interventions to maximize residual renal function.1, 2

Patients with already compromised renal function, or those with high risk of developing renal impairment after the intervention, are often referred to our nephrology colleagues for optimization and education on possible renal replacement options. 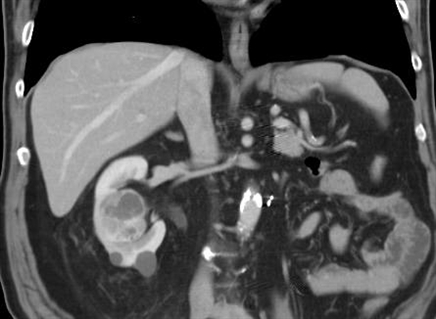 Such was the case with a 69-year-old male with two renal masses in a solitary right kidney found incidentally (Figures 1a and 1b). Patient underwent contrast-based imaging as part of right-lower-quadrant pain work-up. At the time of initial consultation he had interval computed tomography imaging five months apart which allowed us to characterize relative complexity and growth kinetics of the lesions.  Both lesions were endophytic and of high complexity, yielding R.E.N.A.L. nephrometry scores of 2+3+3+a+3+h=11ah and 1+3+3+p+3=10p for the anterior and posterior interpolar lesions, respectively.3 (Figures 1a and 1b.)

Due to concerning growth kinetics, his risk of death from presumed renal neoplasm was judged to be significant. Five year age-adjusted relative survival rate for such a patient on dialysis is reported to be 52%, outweighing the risks of nephron-sparing intervention and complications4.

Desiring intervention and in an attempt to avoid renal replacement therapy, the patient opted for NSS in a form of retroperitoneal open partial nephrectomy. A ureteral stent was placed proactively to mitigate any potential urinary leak.  Both lesions were resected with negative margins but a prolonged ischemic time (54 minutes).

His postoperative course was complicated by prolonged acute tubular necrosis from surgical trauma and ischemia necessary to facilitate the resection (peak serum creatinine 2.71 mg/dL and eGFR 23 mL/min/1.73m2). Co-management by the nephrology team with fluid and electrolyte titration in peri-operative and early postoperative settings were required. The patient was discharged home on postoperative day 8 but persisted with a small urine leak requiring continuous drainage to bulb suction.

Pathologic evaluation proved both lesions to be high grade clear cell RCC 4.5 cm (pT1bNxMo) and 1.8 cm (pT1aNxMo) for anterior and posterior interpolar masses, respectively. All margins of resection were negative.

Dialysis Kidney Cancer
Next post in On The Forefront