In a July 2011 article, my colleagues and I described some recently emerging literature on vegetarian versus animal-based diets (Clin J Am Soc Nephrol. 2011;6:257-264). The article explored the benefits of vegetable protein. However, clinicians may be concerned that long-term plant-based diets lead to insufficient protein intake or an increase in potassium and phosphorus concentrations. Therefore, an exploration of plant-based proteins, specifically soy, is warranted.

Soy comes from soybeans and is made of 3-sn-phosphatidyl choline, phosphatidyl ethanolamine, and phosphatidyl-inositol. It is not uncommon as a meat replacement additive to diets, as the texture and protein content are comparable. Textured vegetable protein, tempeh, and tofu are examples of soy protein foods used in plant-based diets.

Soy consumption may be beneficial because of the high amounts of isoflavones and phytoestrogens. Phytoestrogens in soy products are thought to be responsible for reducing the menopausal symptoms in women, in addition to their potentially beneficial effects on osteoporosis and cardiovascular disease.

However, data on the benefits or risks of high soy intake in CKD patients has been slow to accumulate. In recent years, a few small trials have been published on soy supplementation in hemodialysis (HD) and peritoneal dialysis (PD) patients. A study published in 2009 (J Ren Nutr. 2009;19:389-395) highlighted a potential risk with the use of soy.

The study was an unblinded, randomized trial looking at the impact of soy on plasma coagulating factors. The eight-week study included 36 PD patients (18 on soy and 18 as controls). The soy group received 28-g packets of raw, textured soy flour containing 14 g of soy protein and 233 mg of phosphorus. At baseline, the two groups had no significant differences in any demographic characteristics. At the end of the eight weeks, researchers observed no significant difference in serum phosphorus between the soy group and controls (3.5 vs. 3.7 mg/dL, respectively).

In an another small trial (J Med Food. 2006;9:368-372), investigators compared soy with whey protein in HD patients to study the effect on oxidized LDL concentrations. The study randomized 17 HD patients to receive either soy (seven patients, 25 mg protein and 52 mg flavones) or whey (nine patients) for four weeks. The study demonstrated no statistically significant changes in laboratory values between pre- and post-intervention for either group, except for serum creatinine, which significantly decreased in the whey group. A significant difference in mean change of oxidized LDL was found between groups, with the soy group decreasing by 31% and the whey group increasing by 11%.

Despite the limitations of these studies, including small size, unblinded design, and limited data on the effect of soy protein on potassium and phosphorus, the data seem to indicate that in pre-dialysis and dialysis patients, soy use may have some benefit.

It should be noted, however, that soy may impact coagulation factors, so careful monitoring of clotting parameters would be warranted in patients consuming high amounts of soy. If patients are vegetarian, would like to become vegetarian, or are just interested in including more plant-based protein sources in their diet, soy may be a reasonable choice to consider. 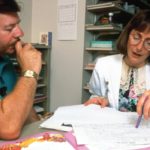