Cardiovascular disease (CVD) is the most common cause of death in CKD patients receiving dialysis. Contributing significantly to the high cardiovascular mortality rate are disturbances in lipid metabolism, especially hypertriglyceridemia.

Nevertheless, the mechanism behind the pathophysiologic disorder is incompletely understood. Currently, the most prevalent etiology for CKD is diabetes mellitus, and patients with both disorders are at great risk of death due to CVD. Thus, designing effective interventions directed at lipid metabolism is key to improving mortality rates in this population.

It has been well documented that CKD patients have dyslipoproteinemia. In fact, the qualitative characteristics of dyslipoproteinemia found in the early stages of CKD are the same as those seen in later, more advanced stages.

This altered lipid metabolism may be the result of many variables, such as insulin resistance, hypertension, diabetes, and obesity. However, teasing out the risk/benefit ratio of obesity and lipid concentrations is difficult in dialysis patients, who are subject to reverse epidemiology.

Current epidemiologic data indicate that low serum cholesterol and low BMI are independent risk factors for death in these patients. Thus, even though CVD is the leading cause of death, the traditional medical model of using pharmacotherapy to reduce cholesterol and triglyceride concentrations to very low levels may not be appropriate in patients with end-stage renal disease.

Alternative treatments, such as the use of omega-3 fatty-acid supplementation, may be warranted as a first-line intervention for dyslipidemia. Omega-3 fatty acids are thought to reduce the incidence of CVD through their ability to suppress inflammation and inhibit platelet activation and by direct action on the myocardium (J Ren Nutr. 2009;19:267-274).

Two specific components of omega-3 fatty acids are thought to be important in CVD prevention: eicosapentaenoic acid (EPA) and docosahexaenoic acid (DHA). EPA and DHA exert their mediating effects on the cardiomyocytes through interaction with sodium channels.

Similar to the previous studies, Vernaglione et al compared omega-3 supplementation (2 g/day) with olive oil (2 g/day) for four consecutive months in 24 HD patients (J Nephrol. 2008;21:99-105). At the end of the study period, systolic, diastolic, and mean BP were significantly lower with the omega-3 intervention. However, there were no differences in lipid concentrations.

Although the results of these studies are inconsistent, they do indicate that the inexpensive and relatively safe intervention of using omega-3 fatty acids may be effective in lowering the risk of CVD in HD patients. The mechanism appears to involve modulation of such risk factors as LDL particles, triglycerides, and BP while increasing HDL, a protective factor in HD patients. 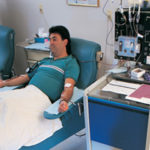