The trace element selenium is a co-factor for enzymes including glutathione peroxidase, 5′-deuidunase, and thioredoxin reductase.

As such, it is responsible for the antioxidase protection of cells against destruction by hydrogen peroxide and free radicals. A free radical is “any chemical species capable of independent existence that possess one or more unpaired electrons” (Int J Biochem Cell Biol. 1995;27:109-122). These reactive oxygen species (ROS) are capable of oxidizing all types of macromolecules, such as proteins, lipids, and nucleic acids.

Factors such as age, inflammation, fluid retention and dialysis treatment may increase the levels of oxidative stress in patients with chronic kidney disease (CKD), resulting in the ROS formation. Antioxidant nutrients have been shown to be reduced in CKD patients (Nephrology. 2008;13:17-22).

Statin use can impact selenium reserves

Two new and interesting studies have shown that there are ways other than pill supplementation to increase selenium concentrations and glutathione peroxidase activity. The first was by an Italian group, which examined the impact of statins on selenium status in hemodialysis (HD) patients.

The study, by Taccone-Gallucci et al (J Trace Elem Med Biol. 2010;24:27-30), enrolled 103 HD patients and 69 healthy controls. Results showed that the patients receiving statins had serum selenium higher than both the healthy controls and the HD patients not receiving the medication (111.83 vs. 96.47 vs. 81.65 μg/L, respectively). Normal ranges for serum selenium are 60-120 μg/L. The authors suggest that statins have antioxidant properties which spare selenium reserves. This study was the first of its kind and certainly of interest.

The second study, conducted in Brazil by Stockler-Pinto et al (Nutrition. 2010;26:1065-1069), examined the impact of a single Brazil nut on selenium stores and glutathione peroxidase activity in 81 HD patients. It turns out that one Brazil nut contains approximately 290 µg of selenium. The dietary reference intake (DRI) for selenium is 55 µg/day for both females and males.

Therefore, a 5 g Brazil nut contains a dose of just more than five times the DRI. Investigators measured serum selenium, erythrocyte selenium, and glutathione peroxidase values before and after three months of supplementation with one Brazil nut daily. This simple intervention resulted in statistically significant increases in all measured indices. At baseline the values indicated that 98.7% of the patients had serum selenium below the normal range with a mean of 18.8 μg/L.

Baseline erythrocyte selenium was 72.9 μg/L, and the mean glutathione peroxidase activity was 46.6 U/g of hemoglobin (Hb). Post supplementation, the values increased as follows: serum selenium to 104.0 μg/L, erythrocyte selenium to 244.1 μg/L, and to 55.9 U/g of Hb. The normal range of glutathione peroxidase activity is 27.5-73.6 U/g of Hb. Neither the phosphorus nor the potassium increased significantly during the study period.

The baseline values of serum selenium differed substantially between the Italian and the Brazilian study. Selenium soil content and dietary intake may be partially responsible this variation. Dietary sources, other than Brazil nuts, rich in selenium are grains, meat, poultry, fish and dairy products.

Suboptimal values of selenium have been observed in CKD patients both on dialysis and prior to dialysis. Supplementation with selenium, by either pill or Brazil nut, has been shown to be effective in increasing selenium status and glutathione peroxidase activity. Additionally, those patients receiving statins may be less likely to need selenium supplementation as statins may spare the body stores resulting in higher selenium status. 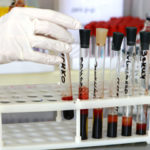