Despite the 2014 FDA warning of an increased risk for deep vein thrombosis (DVT) with testosterone replacement therapies (TRT), a new study finds no heightened risk with these products.

In a chart review of 1180 hypogonadal men (mean age 43 years) who had a mean follow-up of 25 months, including 694 treated with TRT and 486 with clomiphene citrate (CC), the overall rate of DVT was just 0.8%, Parviz K. Kavoussi, MD, of Austin Fertility & Reproductive Medicine in Austin, Texas, and colleagues reported in Urology. DVT occurred in 1.3% of TRT and 0.2% of CC patients. There were no differences between the TRT and CC groups in testosterone levels or probable DVT etiologies. None of the men had polycythemia at the time of DVT diagnosis.

Of the 10 men who developed DVT at a mean 22 months after initiating therapy, 7 were found to have another probable cause for DVT. The team identified DVT etiologies such as venous stasis, trauma, Klinefelter’s syndrome, and thrombophilia/hypofibrinolysis.

“Although the body of evidence in the medical literature is not very robust, the majority of data are in agreement with the data of the current study,” Dr Kavoussi’s group wrote. “There is not a significantly increased risk of DVT in men on TRT or CC versus general overall population risk.” The lowest reported DVT risk in the general population is 0.2%, according to the study authors.

In the study, 64% of men had hypogonadism of the mixed (normal luteinizing hormone, LH) variety, 16% primary (elevated LH), and 20% secondary (low LH).

The authors reported no external funding or conflicts of interest. 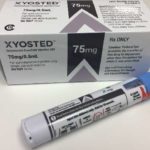